We had a popular campaign at our club in Bristol www.bristolwargaming.co.uk of Frostgrave running for about a year which came to an end about a year ago. On Sunday we had a game which has re-ignited our interest and introduced a new player, and are now looking forward to starting another campaign. 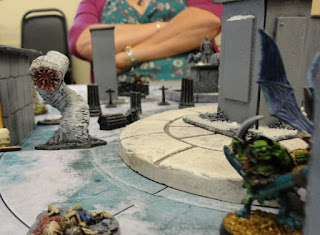 We had a four player game and rolled the Worm Hunt scenario. At the top of the picture are Richard's Summoner band, to the right Carole's newly painted Necromantic band, at the bottom my Witch band and on the right Andy's orcs (I can't remember what their school of magic was). Kev, who has been playing Frostrgrave more recently decided to act as a GM, controlling the monsters and reminding us of the rules. 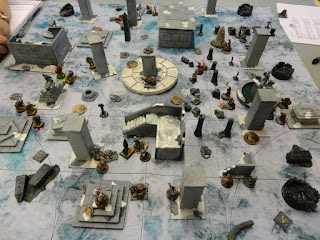 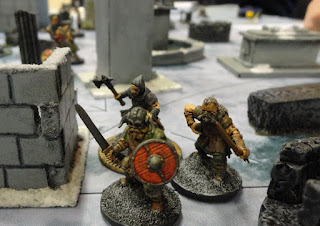 Richard had his knight become possessed by a demon upgrading its stats, he soon summoned a zombie, providing an extra pair of hands, and a familiar giving his wizard extra health. 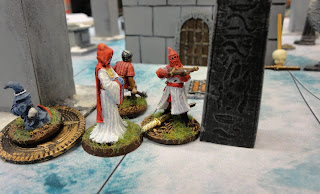 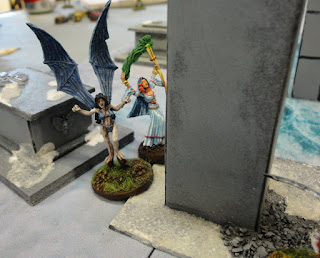 There was an exchange of missiles and attacks between the orcs and the opposing bands on either side resulting in a death and some damage. As treasures were claimed monsters started popping up including a horde of giant rats. 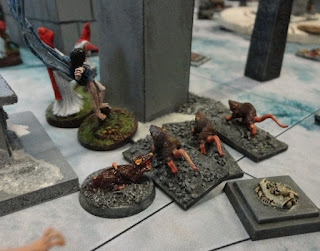 For the first half of the game the wizards failed to cast most of their spells, injuring themselves in the process. 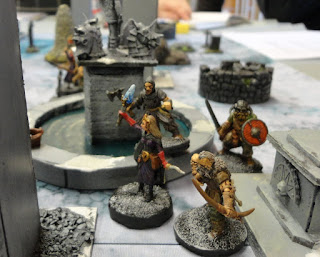 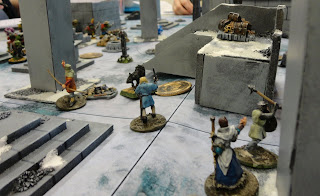 My man at arms was stopped as he moved towards a treasure by a ghoul and spent most of the game there. I moved more troops to support him and some died. My thief ran for a treasure in the centre and rapidly withdrew after being reduced to 1 health point by the orcs. 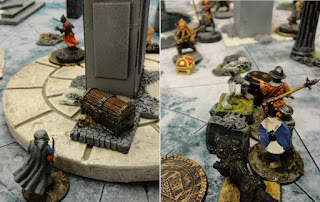 The orc wizard found himself under attack from 2 sides and soon more orcs rushed to rescue him. 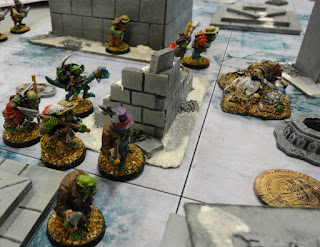 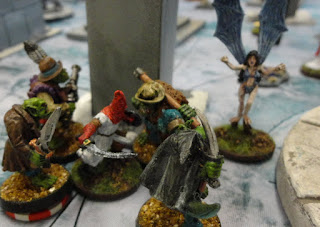 The worm appeared between the Summoner and Necromancer bands and inflicted casualties on both before being killed by Carole's band. This was a one off game but in a campaign this would be worth a lot of experience points. 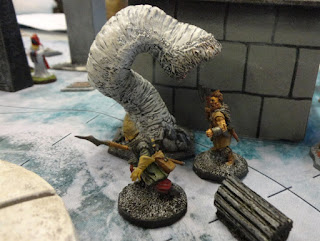 Andy and Richard broke off having gained all the treasure they were going to get. As my depleted band struggled to get their treasure off the table several were picked of by Carole's band and monsters. My wizard ended up carrying a treasure off himself (the indignity). 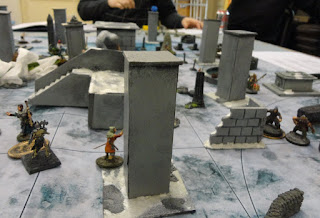 We aim to run a campaign now with 8+ bands. The mat is printed vinyl, not sure of the manufacturer. Most of the terrain was made by Kev.
Carole was the winner getting most treasure and experience and taking the smallest losses.