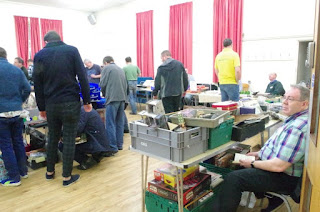 Every year, in May, the club runs a table-top sale. This is a car boot sale kind of event, with lots of different sellers and the chance to pick up bargains.

The sale will be at Lincombe Barn, Overndale Road, Downend, Bristol BS16 2RW on Sunday 20th May 2018.

The format will be similar to mainstream table top or car boot sale - we will supply the tables - you sell your own goods at prices set by yourself.

Charges are £10 per 6ft x 2ft table (approximate size). A maximum of 2 tables can be booked.

We anticipate having around 40 tables. They are offered on a first come, first served basis

This charge covers the table and entry for two people per table. If you wish to share a table between 3 people, then please enclose a further £4.00. (A maximum of 3 per table please).

Please note that only people with a sellers pass will be allowed in before the public opening time. The Barn will be open from 8:45am for sellers to set up their tables.

Although not planned this as a trade sale, wargames traders will be most welcome, especially if you wish to offer old or discontinued stock at cheap prices!

If people are interested in attending as a seller, please leave a comment and I'll get back to you.

If you just want to come along to browse and buy, all you need to do is turn up on the day.

Posted by Monkeylite at 00:36 No comments:

Today we tried, the new rules from Two Fat Lardies named,What a Tanker. Each player controls one, or a very few tanks. In fact, we had two groups playing, one with 15mm models and another with 28mm

Each tank has a ‘dashboard’ with it’s characteristics such as armour, gun value and any special attributes. Players roll command dice and each number on the dice allows the tank to carry out a different action (move, acquire target, aim, shoot and reload), sixes can be swapped to any value and used for other bonuses. This means some turns you won’t be able to do exactly what you want which we can put to confusion, panic or to the crew having the god like view of the battle players. Initiative is also rolled each turn so you can never be certain of anything.The dashboard places to put a token to keep track of having acquired a target, having aim, being loaded and being buttoned down. 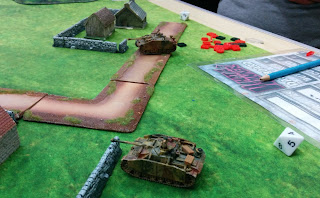 Phil and Kev were the Germans with a Stug III each while Martin and I were Russians using 1941 T34s. Our tanks were designated as Fast which meant we could swap one command die of any value to a 1 for movement. The Stugs, as tank destroyers could similarly swap a dice to 2 for an Acquire Target action, having a low profile they also required an extra action for us to acquire them. 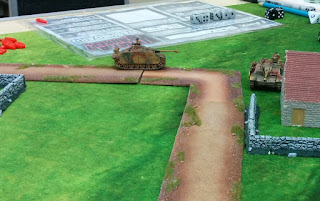 Game 1: I moved behind a wall as Phil moved out to see me. Although range is unlimited there were several obstacles between us, meaning he needed 3 acquisition actions to acquire the target. I darted behind a building and hid there for a turn or two until I got the right dice, just adjusting my turret so it would be in the right position when I moved. Phil started moving across to the group of buildings at the top of the table. 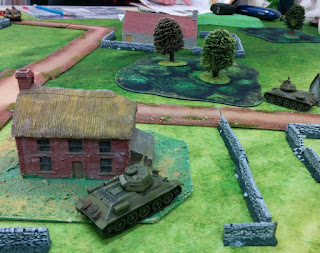 When I got the right dice I was able to move forward, acquire, aim, fire and then move again to reverse back to cover. Having hit the tank I rolled my six damage dice and Phil rolled his six armour dice to cancel them. I scored 3 unsaved hits resulting in the Stug being destroyed.

Meanwhile Martin moved up through the village keeping out of sight of Kev, through a wood and into the same compound as the enemy tank. Getting the initiative ahead of Kev he was able to move again and fire into the Stug’s side destroying it. Round one to the Russians. 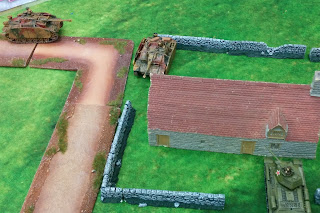 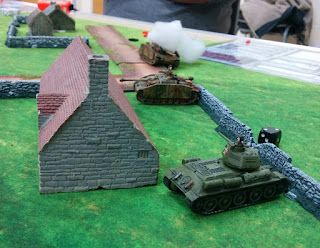 Game 2: This time we played from the narrow ends of the table. I moved up into the village hoping to slip past the Stug opposite using my speed to stay out of the fire arc of its fixed gun. Phil was about to mount a hill from which I would have no hiding place so I disappeared into the trees. Kev’s tank which wasn’t in danger yet from Martin’ moved into the wood too, blowing me up on his second shot. 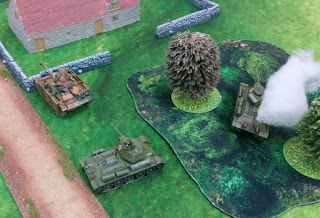 Kev then moved up to a wall for cover from Martin, but the T34 was able to rush behind him and hit him from behind, with no effect. The T34 then drove off and found itself caught between the two Stugs which destroyed it. Round two to the Germans. 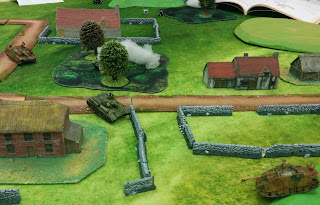 Game 3: Martin had to leave and Nick took over a Russian tank. He had line of sight to Phil’s tank at the far end of the road and managed to kill it on the first activation. This wouldn’t make much of a game so Phil returned with a new tank the following turn, using a Panzer VI this time. 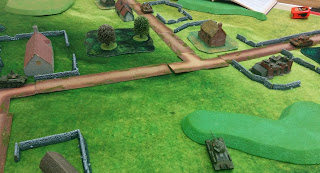 I advanced a bit and found Kev’s Stug advancing up the road could see me, but didn’t have the dice to make the most of it. I advanced to a hill for a hull down position and we exchanged shots for a few turns. 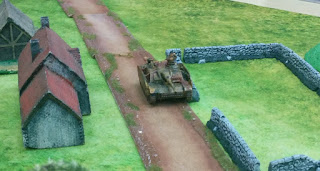 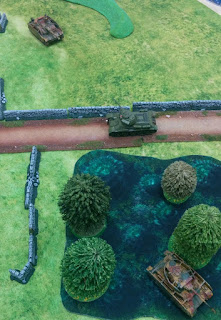 Kev moved into some cover and with equal cover and his better gun I decided the odds weren’t favourable and to move out of his line of sight, hoping to flank the Panzer VI which was facing off against Nick. I was taking damage from it meant losing command dice and putting them on the damage dice box on the dashboard. I moved around the wood to stay out of sight, stalling for time to roll sixes which allowed to recover the command dice. Phil moved through the wood to appear right next to my side. At this point Phil had to go and Carole took over.

Kev and Nick were now failing to engage from their respective farm enclosures with various obstacles in-between. Kev now broke off and moved to intercept me. I moved round the wood and up to a wall but Kev was able to hit me and destroy my tank. Nick returned to his original position and engaged Carole’s Panzer VI and she blew him up.

This game was a lot of fun. It was quick so you don’t feel let down if you get destroyed on the first hit, it doesn’t devolve into both sides finding a good spot and staying there and repeating the same shots turn after turn. It requires frequent decision making as you decide how to make use of the dice you roll. 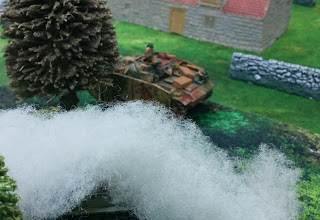 Other players were playing a game using 28mm scale tanks, also playing the rules for the first time. I think if you are going to use big models you need a really big table or there isn’t enough room for manoeuvre.
Posted by Owen_LBWS at 16:17 No comments: