There were 8 players. We each played 3 games. The tables were pre-set with terrain and all games used the Pitched Battle scenario.


I took my Mechanoid army consisting of Robot Infantry, Heavy Droids and Battle Mechs. They use a different command mechanism to other armies, having no commanders getting D6+2 commands per turn rather than rolling for each unit individually. However, they do still have to roll if they are damaged. 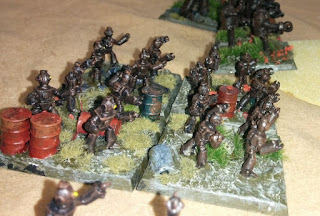 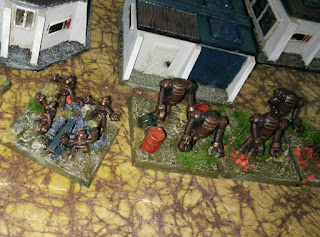 In my first game I faced Nick’s 2nd Global War Allies army. This featured lots of tanks, more than are allowed in other armies this size. However, some were unreliable and impetuous. 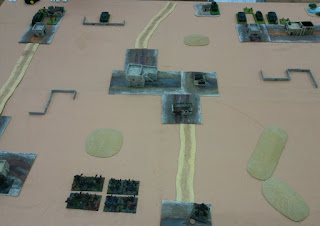 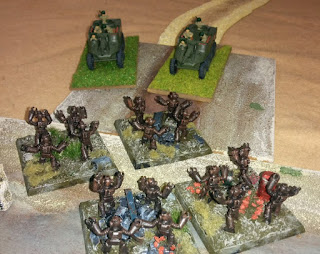 I used the built-up area in the middle to cover my advance and my infantry assaulted the tanks that had moved into it. A Battle Mech moved up the flank late in the game finishing of a damaged tank form behind, before beating off attacks by infantry. 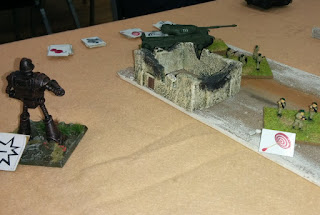 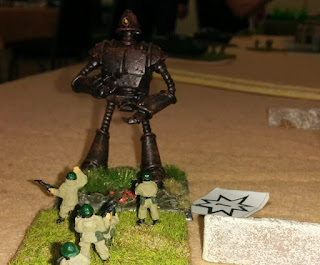 At the time limit several of Nick’s units were on their last hit, the army was close to it’s break point. However, the points difference was small, so it counted as a draw.

In my second game I played Alex Leitch’s Human Imperial army on the same table. Alex deployed only on the centre and my right. I advanced in the same manner as the first game but my units were taking hits as soon as they moved up to the edge and soon numerous units were reduced to a single hit. 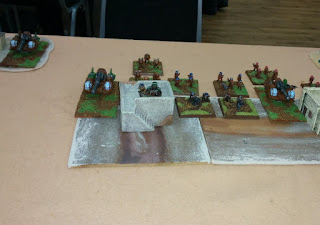 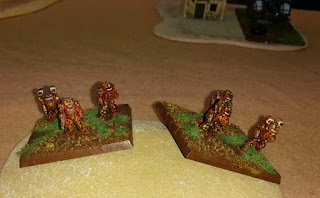 I thought my army had broken because I’d forgotten that Mechanoid armies don’t break until they are reduced to one unit. Had I realised I would have fallen back to a second of cover which should have preserved a few units until the time limit was reached.

My third game was against Alex Self’s Alien Predatory War-host. The main units of this army are beasts, but with a 6+ armour save and not subject to the short command range of primitives, and some of them have guns. 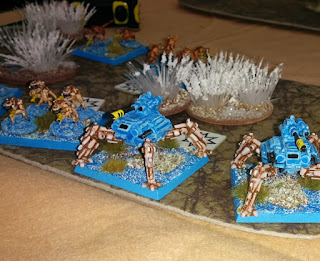 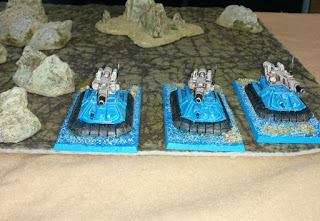 I deployed in the cover on my side and waited, hoping to catch them in the open as they tried to charge. 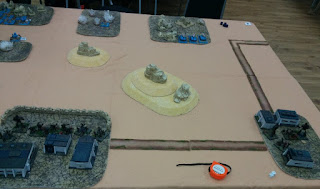 On the right I moved one of my Battle Mechs across to a position where I could fire on the main threat. Alex’s three tanks faced off against a Battle mech and some infantry left on the right, advancing on, and then charging the Mech. I destroyed 2 and the other pulled back to fire into the main battle. 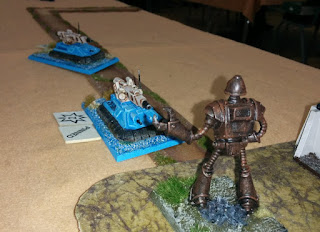 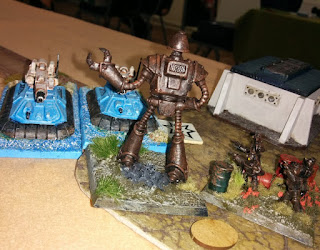 His infantry massed on a hill ready to attack and I drove some off. 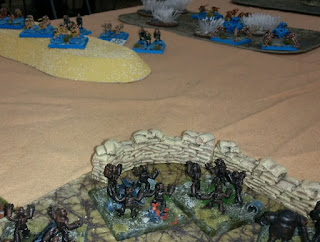 They made repeated charges, making it harder for me to find anything to shoot back with but in the end they weren’t doing well enough in the melee. I moved some units into the open to shoot at his damaged units that had recoiled into the open and was able to push them to their break point 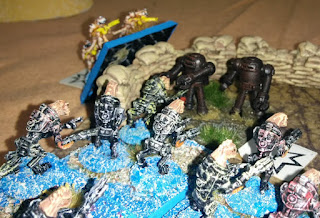 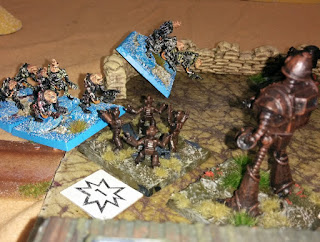