This is a 50 point game of 7TV using the Pulp rulebook and fan-made Dr Who profile cards from the 7TV Productions facebook group. All the models are from the old Harlequin range. 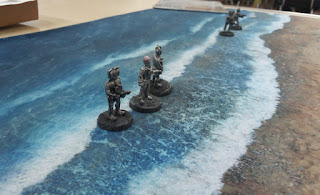 I had Cybermen. While the models depict 1960s Cybermen the stats are for the modern ones. They are very hard to kill and very expensive, I was outnumbered significantly. I had a Cyber-Leader and 5 Cybermen.Kev had the Master, the Myrka (a monster made from a pantomime horse which became an infamous example of bad special effects), a Sea Devil leader and a mixture of regular and elite Sea Devils. 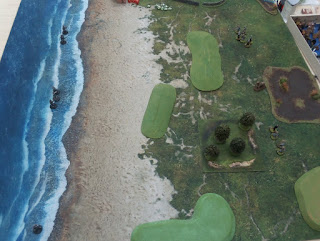 The Scenario requires the Sea Devils to exit the table on my side carrying a 'Mcguffin'. The countdown cards left my central group unable to activate on the first turn, and the same group were knocked down by a blast on the second turn. The countdown card inbetween allowed my models a short free move but it soon became clear the Sea Devils were going to come to me as fast as possible anyway so the terrain wasn't going to have much effect. 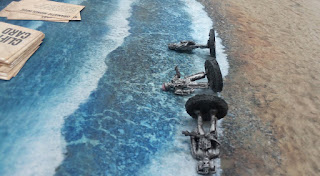 A large group, forming a unit with their leader came down what I'll call the North of the the table. The two Cybermen did a great job. An early casualty was revealed to have been carrying the McGuffin which the Sea Devils crowded round to protect. With shooting and then despite being mobbed in melee I took out most of this lot. 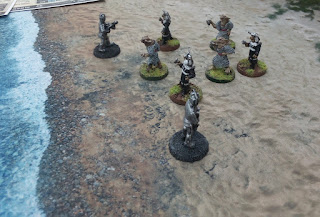 The Myrka headed for my central group attacking the Cyber-Leader and one Cyberman. The Master tried to slip past but my Cyber-Leader was able to intercept him. Shots were fired, the Master was unable to use hypnosis against models with the Robot rule. We each had one gadget which now came into play, I moved into contact, the Master used a teleport ring to escape and I used a rocket pack to chase him! 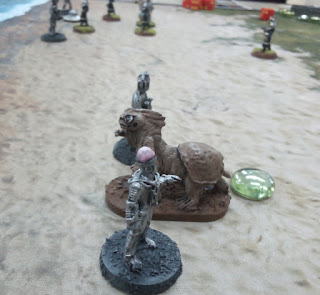 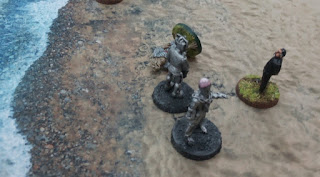 At the South end of the beach it was one on one. After some shooting the Sea Devils charged, both were stunned and one then taken out with a second stun. A countdown card came up that required the next two cards to be drawn and played. One relieved everyone of statuses (like stunned), the other caused all Extras (non characters) to be knocked down. That was find by me, using an action to stand up delayed them exiting the board. 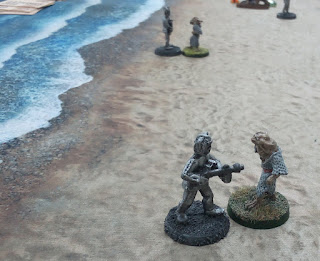 With time running out the remaining Sea Devils ran for the sea. One Sea Devil escaped with the McGuffin. 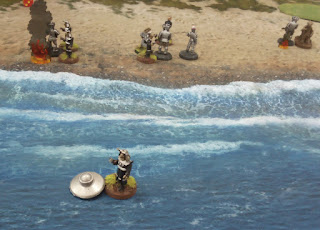 In my last turn I had a great round of shooting, killing three more Sea Devils. This took Kev below half strength.  In his next turn the survivors  would have had to take morale tests, possibly running away, and I would have gained another victory point. However I'd chosen to take two countdown cards rather than one to end the game there and prevent more models escaping, so Kev didn't have another turn. This resulted in a draw. It was great to get these old models into a game at last and 7TV is always fun. 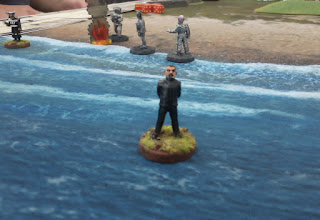 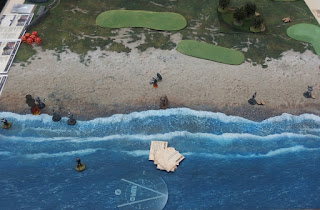