Last week we played Gaslands, recently published by Osprey, for the first time, a post-apocalyptic game involving armed cars and bikes.  We used converted matchbox type vehicles  which are in roughly 20mm scale and bikers from The Scene’s Wasteland Warriors range, from Kev’s collection. 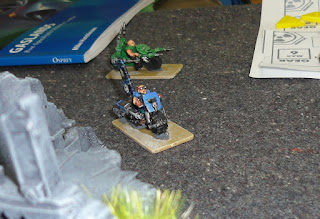 Vehicles are typically armed with guns fixed to the vehicle with narrow fire arcs, other options include caltrops and petrol bombs. 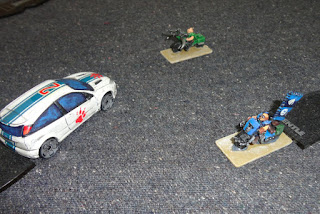 It uses cars with guns in roughly 20mm scale like Devils Run, which we looked at in March, and Games Workshop's old Dark Future. However unlike those games it isn't confined to chasing along a linear road but is more like Car Wars, but is faster paced and more intuitive. 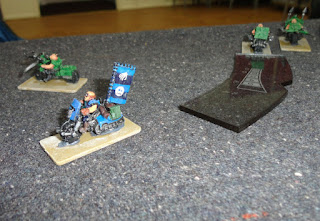 There are templates for different manoeuvres, some are only available in certain gears. At different speeds there may be more or less risk. The template determines where the vehicle ends up, which could be one of three places depending whether the car spins, drifts or remains on course. 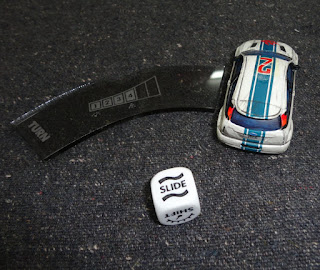 Each time a vehicle moves dice are rolled and Shift results are used to manage the various risks and to change gear. You can pick up hazards, and get rid of them using shift results, and if you get too many you lose control and bad things happen. 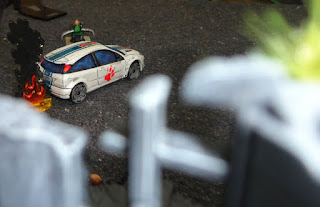 Vehicles can change gears, if you aren’t using up all your Shift results keeping control, Vehicles act once in each phase for their current gear and below, so a car in third gear acts in three phases of the turn. This had one odd result that the crew of a vehicle in 4th gear were able to shoot their personal weapons 4 times as often as their target was in 1st gear. 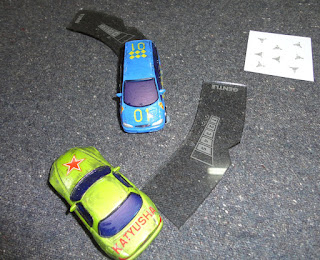 We have various collections of such figures from GW’s Dark Future and more recently Devil’s Run (which we looked at in March), so we can now get some more use out to them. 
Here are the LBWS meetings over the festive period:

Sunday, 17th December - A free meeting with some festive goodies.

Posted by Monkeylite at 12:10 No comments: 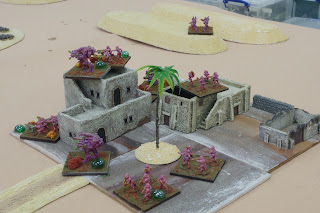 We had our annual ASQL tournament last week. Check out Hippolyta's Tiny Footsteps: