Last week we played Warhammer Ancient Battles, a set of rules I haven't used for about 5 years. The Romans are all Foundry figures, the Celts come from many different companies. 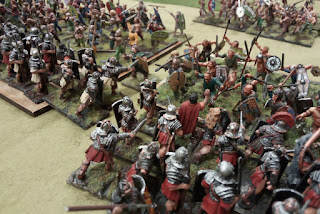 The armies were around 1600 points.The Britons had a Warlord, 3 Chieftans and a Battle Standard bearer, anything to get the points up, while I fielded the Legionaries in units of 16 rather than my usual 24 and with no Battle Standard (I still need to paint a lot of Celts) 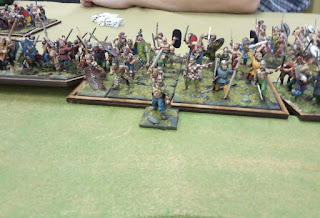 I took the Romans, the Legionaries have heavy armour and large shields making them very durable. The terrain table brought up a river which cut off part of the table.I set up a Scorpion ready to harass any enemy deploying on the other side and trying to cross later, and my other Scorpion covering an approach between the farm and the wood. 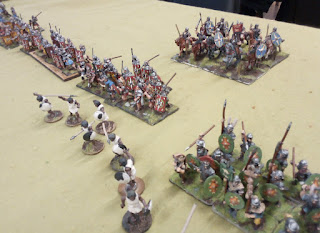 The Celtic light cavalry charged my skirmisher who ran away and never returned (skirmishers just don't work in these rules). My Legionaries charged and defeated the cavalry and they fled in front of the British Chariots, preventing them from declaring any charges. 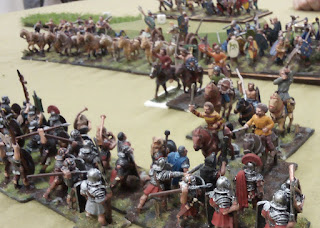 This allowed my Auxilia to charge the Chariots and a melee ensued that lasted five or six rounds.
The Warband charged my line, immediately routing my Auxila Archers.routed and then rallied. My Cavalry positioned themselves for a flank charge but were caught in the flank themselves when a Warband destroyed a Legionary unit and pursued into them. 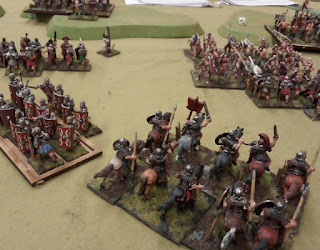 On my left flank one unit of Legionaries and the Auxilia Spears defeated the Chariots and some Warband and chased them off the field, others routed due to panic tests. John't General was lost in the rout and the Battle Standard left alone. 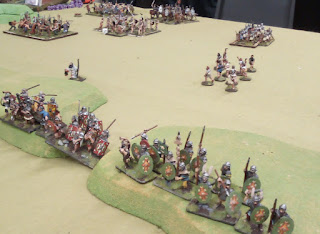 My General broke off to charge the enemy Battle Standard Bearer (the druid figure) in single combat and deprive the opposition of their leadership re-rolls. My General was slightly better in combat and only needed to inflict one more wound while having three himself, but he lost. 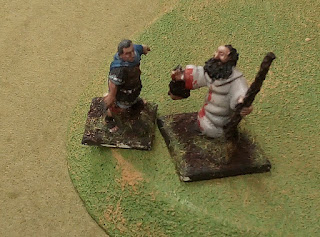 The battle was now being fought left to right with three Celtic units left on the right of the table. 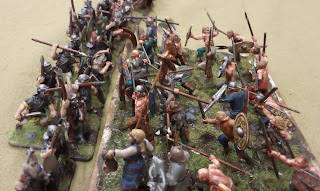 There were a series of combats with units destroyed on both sides, and when the Celts were reduced to one unit we called time. 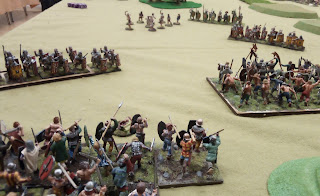