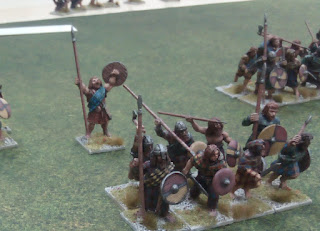 The Scots had a 1 unit of mounted hearthguard, a unit of levy archers and 4 units of warriors. My Anglo Saxons were all warriors, split into 4 units of 12. 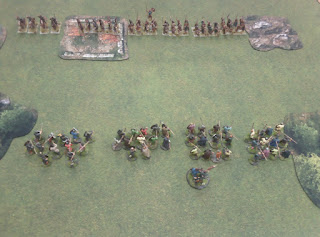 My first concern was the archers. The Anglo Saxon battle board abilities are heavily based around having units of 10, or outnumbering the enemy. A few losses each turn from these would rapidly diminish my ability to use these 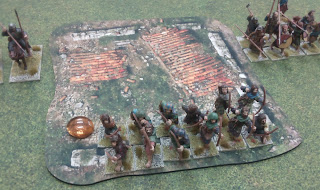 I charged in with bonuses from the battle board, warriors vs levies and I should have probably killed most of them but dismal dice rolling caused only a few casualties. I charged them again in the next round with the same result. 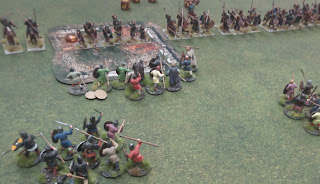 Battle commenced between the warriors. Multiple battle board abilities were piled up on both sides but the result was zero casualties, the exact same thing happened the next turn as well. The Scotts are good at generating piles of defence dice, in one round I rolled the maximum 16 attack dice and got nothing from them. 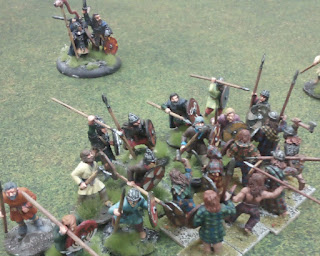 On the left flank the mounted hearthguard, after making failing to make much impact with their charge, moved back from the approaching large unit of warriors. My unit was able to charge the archers who had another miraculous escape (well half of the survived). 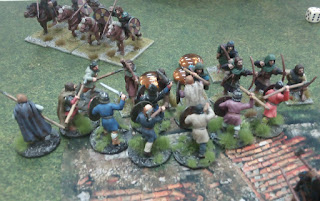 The main bodies of warriors continued to clash. By now my army was generating fewer Saga dice, from an already low starting point and my units were falling bellow the crucial strength of 10. 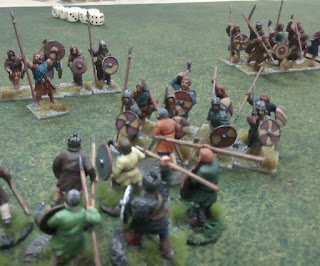 By the end of the game my big units were reduced to stragglers leaving the Scots victorious. 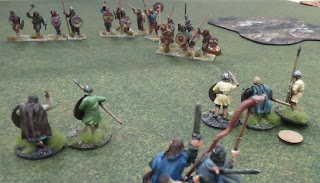 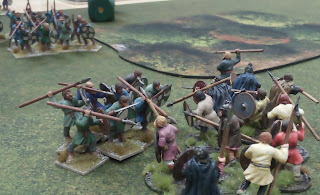 The terrain layout was similar and another unit of arches in the same position as last time was my priority target. I had a wood to cover my advance but the designated unit wasn't able to charge due to the Fatigue being put on them. 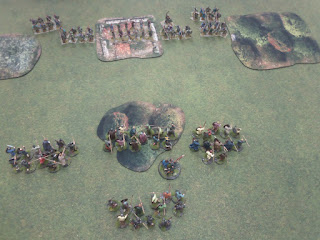 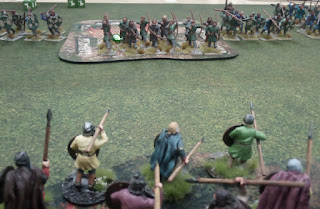 The Anglo Danes specialise in piling Fatigue markers on the enemy and with my small pool of Saga dice my army had a hard time doing anything. 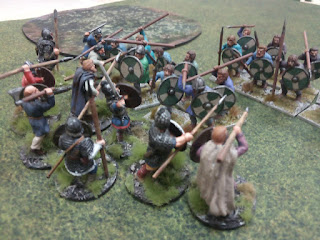 On the left  our units wiped each other out at a rate of one per turn. My units on the left and in the woods were destroyed or reduced beyond usefulness. 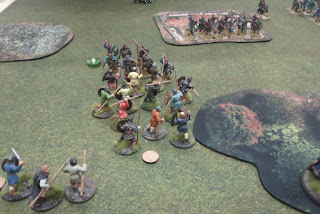 My unit held in reserve moved up and destroyed the last Anglo Danish warriors then moved onto the archers. The archers had a lucky escape. 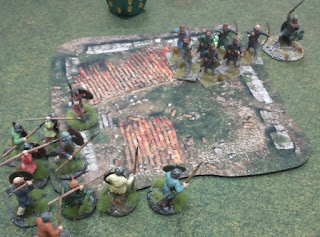 On the right I had only one unit facing off against one unit after another. Clive was able to pile on Fatigue dice and then use them to tip the combat in his favour. I was now generating too few Saga dice to do much more than try to survive. 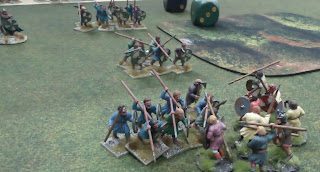 This game went very quickly, about an hour. My army was defeated again.