A few weeks ago I played Sword and Spear Fantasy published by Great Escape Games. It is a fantasy conversion of their historical rules.  I played Clive at the club, http://bristolwargaming.co.uk and both the armies are his. Units have a discipline value which affects activation and their ability to withstand damage, a movement value, combat value and additional traits such as Impact, Armour and missile attacks. 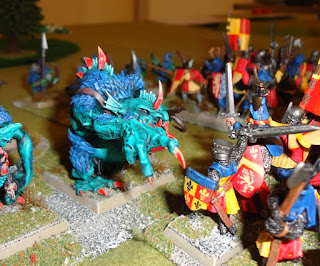 The human army contained consisted of Knights, Heavy Foot, Archers, Skirmish Archers, Cavalry Skirmishers and Pegasus Knights. The Goblins had a Mammoth, Chariots, Trolls, Wolf Riders, Spearmen, Archers and Squigs. The Knights, as in the historical version, are extremely tough, saving hits on a 2+. To balance them the Squigs were designed to counter their abilities (Squigs are monsters from the Warhammer univers). The rules allow players to design units from scratch, which is great if your idea of what a fantasy unit should be like differs from the author's. 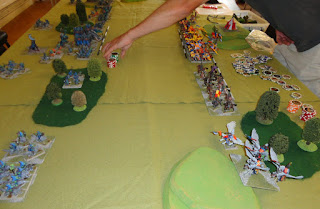 These rules have an unusual mechanism for command. Units and Characters generates a certain number of command dice (usually one) which are placed in a bag. Each turn is divided into several phases where some units on each side activate and complete their turn. A certain number of dice are drawn from the bag and the player with the most dice allocates them to units. Each unit has a discipline value and a die of that value or higher is needed to activate the unit. Some dice drawn will be useless and are discarded. Sixes, or a pair of identical dice given to the same unit give some bonuses. The other player then does the same. Then all activated units perform their actions, and their dice are turned over to 1 to show they are finished for the turn. Then more dice are drawn and another phase begins. When units are destroyed dice are removed from the bag according to their victory points.

Units activate in dice order, which means you never have to wait long before making decisions. Something I like in games is where both players are constantly making choices, rather than making decisions, spending 15 minutes carrying them out and then waiting passively thought your opponants turn. 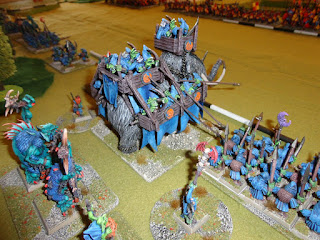 Both sides had Wizards. Rather than having specific spells they get a random number of magic tokens each turn which can be spent on other units in the same way as bonus dice. This does tend to mean that mean that units pile up a lot of bonuses and doesn't have much character.

On my right I used several units of wolf riders to prevent the Pegasus Knights and Mounted Skirmishers getting behind the wood and into my rear. I lost some cheap units but they performed their role well, tying up a high value unit while I concentrated on the left and centre. 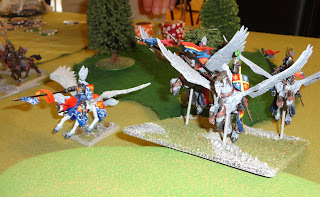 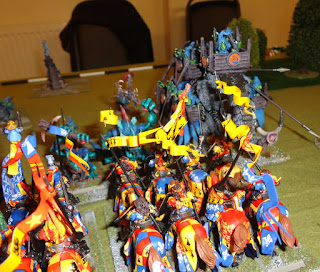 In the centre I had to spend a few turns spreading out from my starting position to bring the rear units into line. The Knights destroyed the Squigs and a melee developed that lasted some time.
On the left my Chariots attacked some Skirmishers in the woods and were then flank charged by Knights and destroyed. The Knights moved forward and looked like they would be unbeatable until I got my other unit of Squiggs into their flank. This unit had a spectacular run, destroying the Knights and pursuing and destroying multiple units. This left the flank largely clear and I moved my Wolf Riders round to flank the human centre. 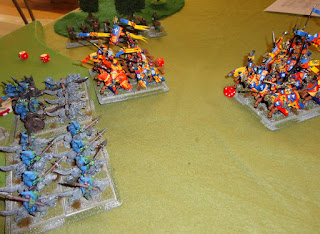 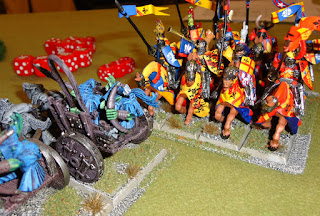 In the middle the human units were gradually being taken out. We didn't have time to bring the game to complete conclusion so my flanking units didn't make their flank charges, but we added up the victory points from the units destroyed, with me ahead, having lost mostly low value units and destroying high value ones. The Squig charge on the left flank was the decisive action. 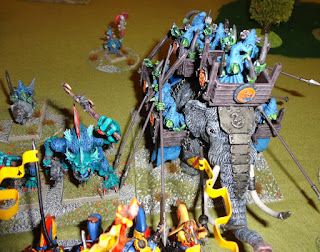 It was an enjoyable game where the balance seemed to shift between players several times.  I have a lot of Dwarves and Copplestone Barbarians in 15mm, too many for even a double sized Hordes of the Things army, and I've been looking for a rule set to use them with, I think this is it. The magic rules were a bit dull, but I really like the fact that both players are always doing something and the ability to customise units. 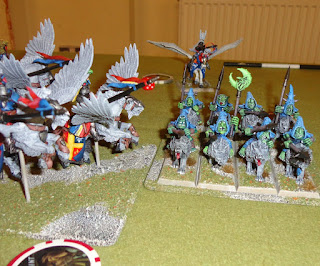