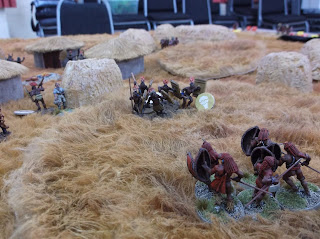 Had an all day session, today, with a good mix of games. We played a couple of games of Congo, playing the Last Queen of Aksoum scenario with African Kingdoms attacking White Men, and then the same scenario with White Men attacking Jungle Tribes. 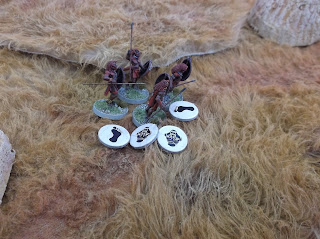 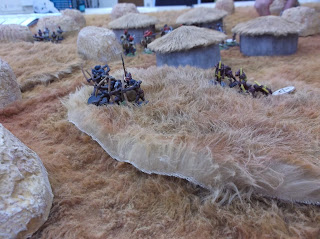 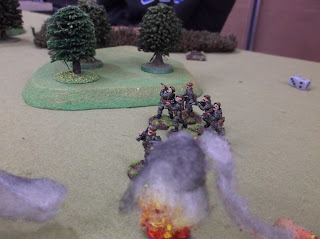 Here's a game of Bolt Action Doctor Who with UNIT versus a Sontaran invasion force. 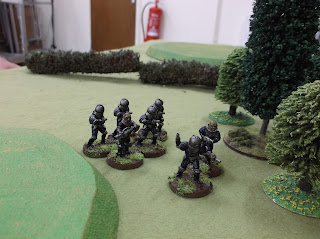 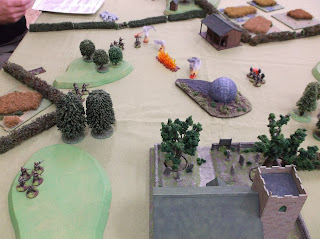 Here's an excellent scratchbuilt Sontaran scout ship, made from a polystyrene sphere and a net. 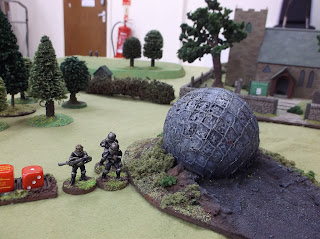 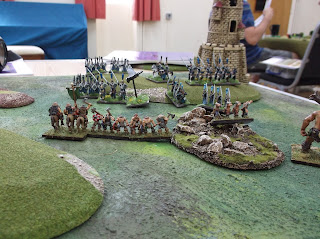 Hordes of the Things with Hyborian barbarians against elves. 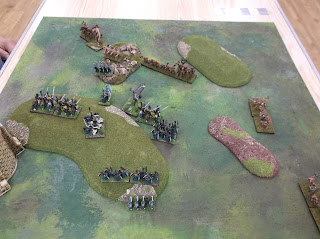 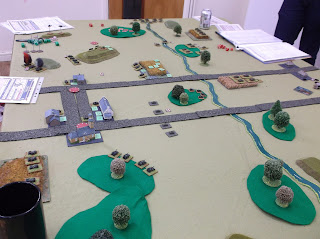 This is a Team Yankee game played in 5mm. 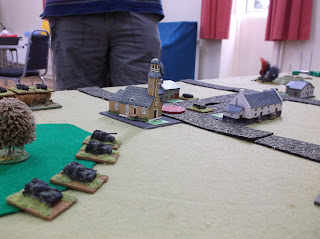 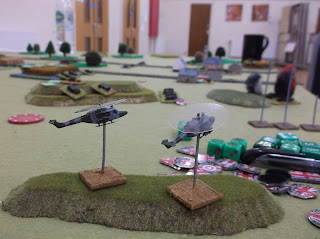 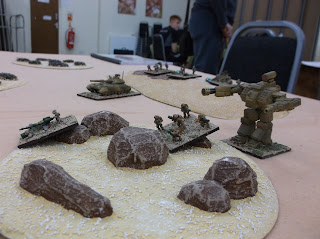 Alien Squad leader. The Human Imperials got eaten by the Hive Mind. 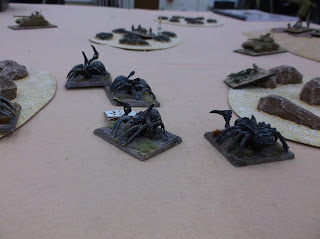 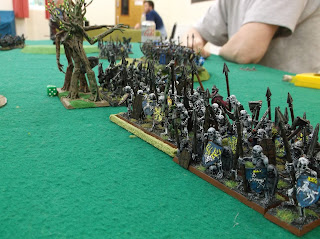 Here's a game of Kings of War, Undead against Wood Elves. 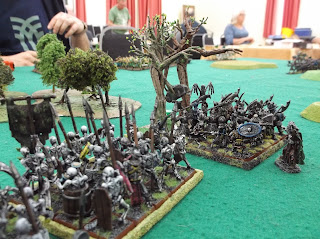 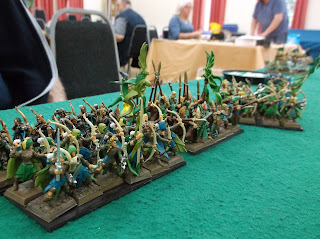 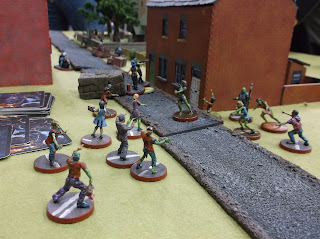 And this is Project Z. 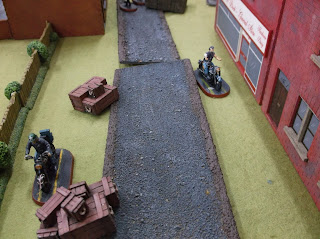 Posted by Monkeylite at 12:13 No comments:

I started playing the first edition, Rogue Trader, back in 1987 and I've built up a lot of armies. 40K dropped out of favour at our club a long time ago and I've only played 2 games using any of the editions since the first. When 8th ed. came out with all the armies contained in 5 books I decided to give it another go. Several others at the club are also interested. 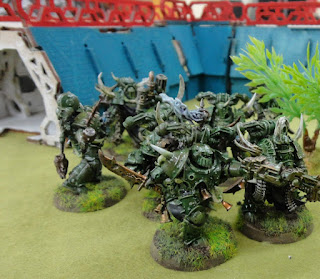 Kev and I played a game with a power level of 39. Power levels are simplified version of points values and save a lot of time. I'm a believer in getting what you pay for, but this saved so much time and fiddling with spreadsheets. Kev's army was rather character heavy, being based on the figures in the starter set.

He had a Death Guard Chaos Marine force a Lord of Contagion (a chaos terminator lord type), a Noxious Blightbringer (who boosts friends and hinders enemies nearby) and a Malignant Plaugucaster (a Psyker), two units of Plaugemarines, 20 poxwalkers (mindless zombies) and a Rhino. 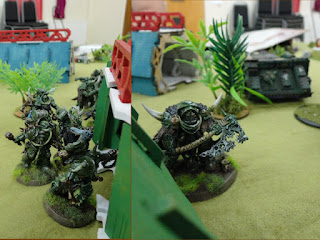 I took Space Marines with a Lieutenant, 3 tactical squads and a Dreadnought. They had a rule where I could re-roll failed morale tests, which I forgot. We also missed the rule that the chaos marines could re-roll 1s to hit Imperial troops. My figures are all from the 80s, And yes, I need to sort out a lot of missing backpacks. 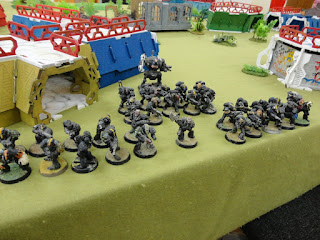 We rolled the No Mercy scenario which gave victory points for destroying enemy units, first blood and having a unit in the enemy deployment zone at the end of the game. The game lasts 5-7 turns, depending on a dice roll. Kev chose the deployment zone and picked Front Line Assault. 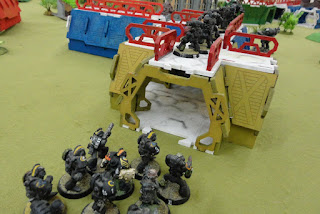 On my left I put one unit on top of a building with a good field of fire. I sent another to take on the smaller Plaguemarine squad on the left, and kept my Lieutenant loitering out of sight waiting for a chance to be useful. I put my Dread in the centre and another squad on the right. 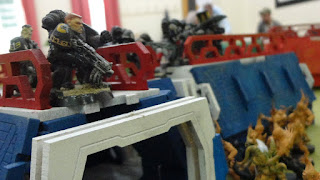 The poxwalkers came through the centre losing half their number before climbing up to assault my marines on the roof. They were wiped out after several turns of fighting, taking 4 marines with them. we also missed the rule that those casualties had a chance of turning into more pox walkers. My Dred shot at several units, causing a few casualties and Kev's Psyker cast spells from the ruins in the centre.

On my left I quickly routed the squad opposite and moved into the centre to take on the Psyker. 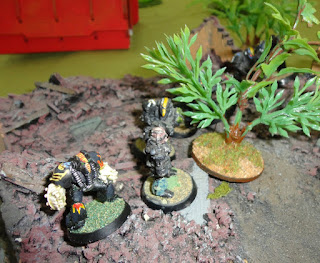 On the right our troops exchanged shots through a building from the doorways before the Plaugemarines charged, boosted by the Blightbringer. The chaos squad was wiped out leaving the character but the Lord of Contagion came round the rear of the marines and joined in. My Dred charged him, was wounded himself and failed his morale test and was destroyed. The remaining marines were wiped out. 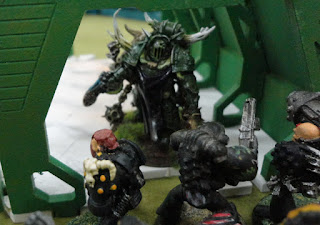 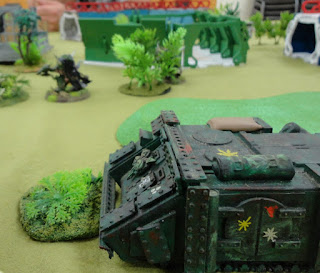 I like the simplicity of the combat mechanism. Unit cards give the dice score to hit rather than a value to be compared to something else on a table. And the wounding mechanism is simpler (equal, more, double). I found the simple points system surprisingly good, I added up what Kev had in less than a minute and was able to put a matching force on the table almost as quickly.

The morale system is sadly lacking. Back in the 80s I used to be frustrated by the fact that by turn 4 the table was full of units either running away, or having rallied, coming back again. I can't comment on the intervening sets, but essentially the new system is that morale tests are modified by the casualties taken and the result of failure is additional casualties (fleeing) according to how much the test was failed by. There is nothing like suppression, there is nothing you can do to impede and enemy (such as pinning it down with one unit so another can advance in safety), except to kill them all. This detracts from the feeling of a real battle.


I have a lot of armies I'd like to get some use from and there will be players at the club willing to play this, so it will do. I have thought about converting other rule sets and writing my own army lists for them, which is a lot of work and I might not persuade many people to play it. I'll consider modifying the morale system though.