Warband is a set of fantasy mass battle rules for 10mm figures by Pendraken. It’s designed for their own range of 10mm (more like 12mm) range and has become popular at the club. 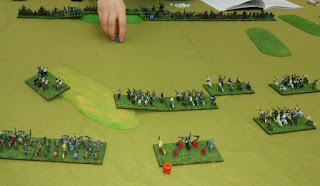 Back in 2000 Warmaster by Games Workshop became popular at the club. It was 10mm with units made up of three stands of troops on 20x40mm bases. After taking up the superior historical version of the rules players didn’t want to go back to the original, in which a flank charge could wipe out a third of an army in one turn. GW dropped the game like so many other of it’s more niche products and the armies have been sold off on the bring & buy or languished at the backs of cupboards for 15 years. Warband is an opportunity to use those figures, by simply sabot basing them on 100x50mm bases. 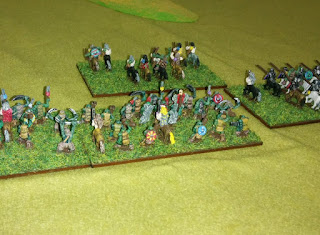 This is my second game using the rules. Richard’s army is his old Warmaster undead army re-based for Warband. Most of the undead units had been upgraded with the regenerate ability which allowed them to rapidly recover damage. I used his Taurian army consisting mostly of Centaurs with Orc allies. The miniatures are from Pendraken. 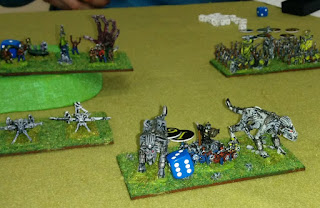 I put the orcs on my left, hoping to put a mass of solid melee troops against his flank which contained his missile troops before I advanced my centre into that missile fire. The orcs took so long to get there that the battle was half over by the time they got into action and they were too late. 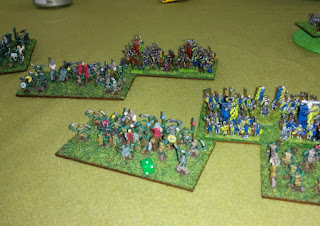 On my right I used light troops to harass and contain more valuable enemy units. Having damaged the enemy with missile fire I tried to finish them off in melee. But they soon regenerated and rallied. I attacked an enemy flank and was in turn charged in my flank and destroyed. They other unit was repeatedly charged and pushed back to the centre of the table before being destroyed. 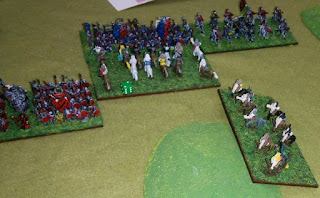 I had my light troops shooting at the enemy in the centre while I waited for the orcs before charging in the centre, but the undead were recovering damage almost as fast as I inflicted it. With the fight underway on the right I decided to commit the main body in the centre. I ended up putting my missile troops in as well to avoid having one unit fighting two enemies, this turned out to be a mistake. 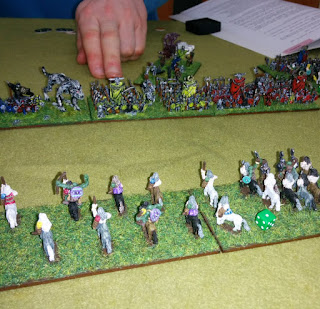 I had scored innumerable hits on the bolt throwers but they were very fortunate in their rallying roles. In the centre I kept sending the centaurs back in. They have 2 melee dice to the skeletons one, but they lose one due to fear and the skeletons were often gaining extra dice from the necromancer. 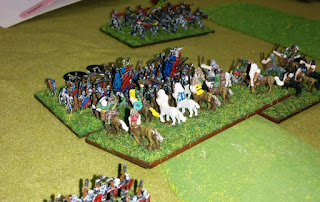 Richard’s magic user was constantly boosting the units around him, giving them extra motivation dice and combat dice, it was a major asset. 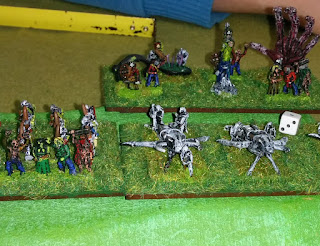 Eventually most of my units in the centre were routing or destroyed and the game was over with only one undead unit destroyed if I remember correctly. 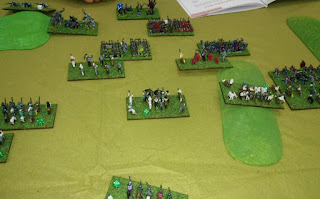 I like Warband, though I prefer Sword and Spear Fantasy. I’ll be digging my old Warmaster Chaos army out of the loft and sabot basing for Warband.
Posted by Owen_LBWS at 06:44 No comments: