On Sunday I played a 1500 point game of Kings of War with Richard at our club in Bristol, bristolwargaming.co.uk 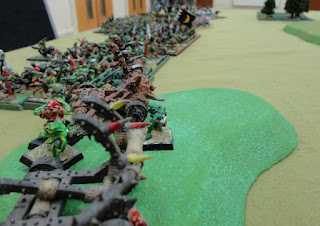 I took Goblins, I’ve never fielded an all goblin army before.  I took a legion of Sharp Sticks, a legion of Rabble, a horde Spitters (archers), a horde of trolls, a regiment each of Chariots and Fleabag Riders, plus 2 Big Rock Throwers. That’s 150 infantry by the way. For heroes I had a King, a Flaggit, a Wiz and a Troll Bruiser (a great figure from Foundry I bought on a bring and buy). 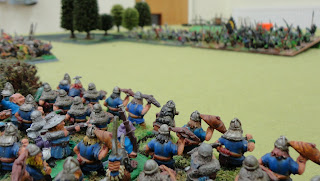 Richard’s army had 4 regiments of Iron Guard, a horde of Iron Watch, 2 Organ Guns, and 2 Kings. Some magic items made the two units on my left especially formidable. 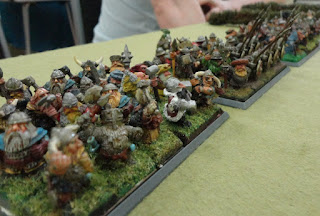 Deciding I was going to lose a protracted exchange of missiles I advanced. My cavalry were stopped by missile fire as they crested the hill, wavering for a turn. Not wanting to wait the Chariots pressed on and were wiped out by crossbows and organ guns. 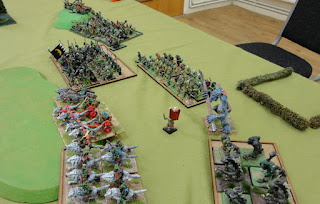 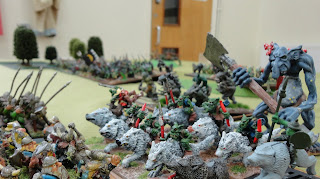 Meanwhile the Dwarf King on that side took out my standard bearer in single combat before charging a horde of 40 archers. 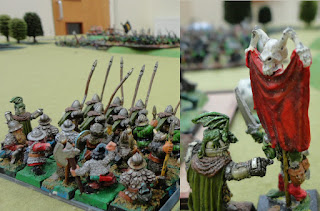 The trolls turned to face the dwarf Rangers but the Horde was destroyed by missile fire before they could charge, the Bruiser charged into the side and routed the dwarves, clearing the whole left side of the field except for one hero. 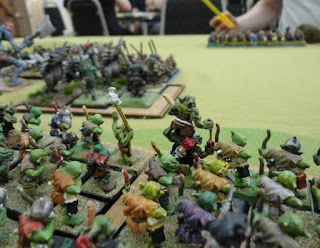 Several times I had the dilemma of accepting a morale result of wavering or use and Inspiring character to re-roll, where a worse result could result in a rout. In each case I went with the re-roll, since if the unit stood there for the next turn and took another round of fire it would be destroyed without achieving anything anyway, twice it worked and I was able to move forward. The last time, when my Troll Bruiser was sent wobbly by the Organs Guns, now facing off against him, I got a worse roll and he was gone.

After some missile casualties, my rabble legion on the right came into contact with 2 units of dwarves. After breaking the rabble the dwarves then charged the spearmen in the flank. With missile hits on them already they both took huge amounts of damage, but both survived a turn longer than I expected. Those huge units can take some punishment. 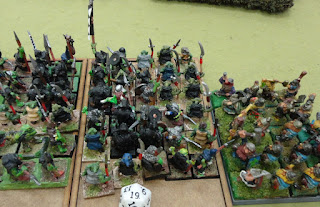 After hitting nothing for the entire game my Rock Throwers both hit a unit of dwarves doing so much damage they might easily have broken if I’d rolled better against their morale. At this point with my army reduced to some archers, stone throwers and characters we called it as a dwarf victory as they still had solid fighting units left.

There was a point where I thought the goblins might win, but that faded when the trolls went, and the loss of the big legions completed it. A fun game.