At the Colours show at Newbury I got myself a copy of the Sword and Spear Fantasy rules. After giving my first impressions from playing the game a few weeks ago I’ve now had a proper read and can add a few more observations. As I mentioned on my previous post I enjoyed playing the game. The rule book is full colour throughout and aesthetically pleasing, illustrated with pictures of troops in varying scales from 28mm down to 6 or 10mm. They will work fine for any scale, it is the footprint of the unit that matters. 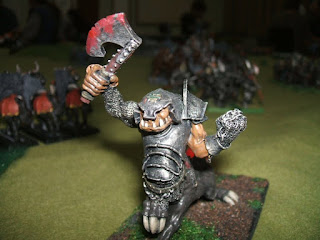 The core of the rules are based on the historical version which I’ve played before. There are fantasy elements added at various stages such as new unit types (monsters, swarms etc), different stratagems, magic, flying and the undead.
Combat is resolved by rolling a small number of dice, the unit’s Strength value plus bonuses. Impetus is an important concept which I won’t get into in detail, but it allows advantages when a unit is fulfilling its battlefield role correctly and is lost when it is placed at a tactical disadvantage. Combat (and Shooting) is resolve by rolling dice, choosing the highest four and comparing them with the enemy’s top four, resulting in kills or forcing discipline tests (failure resulting in a kill). This is modified by attributes such as armour and powerful attacks. This is another point where both players are constantly involved and making choices which is a good thing. 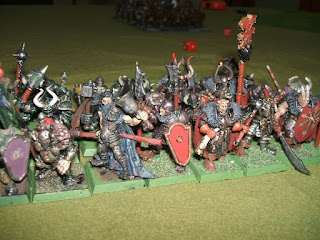 Commanders make units more easy to activate and can rally units, recovering hits. Heroes are present but are a distinct unit type

Army lists are produced with a spreadsheet available online. There are sample army lists for a variety of fantasy armies, often with several different ways to represent a unit according to how you view it. So dwarf warriors might have the Shieldwall rule, or be Armoured or Heavily Armoured depending on which you think is most appropriate. Units can be designed from scratch, choosing unit type (heavy foot, beasts etc), discipline, strength, protection, missile attacks, a melee trait and up to three other traits, and automatically generates the points value. This is very handy. You can have exactly the unit you want. You have to go online to find all this as the formula or sample lists aren’t in the book. 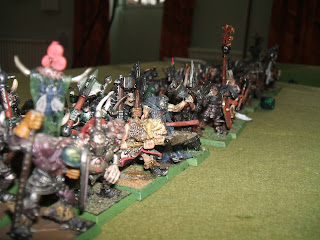 Magic users come in three power levels and get magic points each turn to spend on spells. Spells cast at higher levels are more costly and effective and range also increases the points required. There are a small number of spells: attack, rally/heal, boost, protect, and specific rules for magical attacks on characters. I’d prefer a bit more granularity but I understand the author’s reasoning. One of the Stratagems available is summoning, which is essentially anther spell, I’d have liked a few more of these. 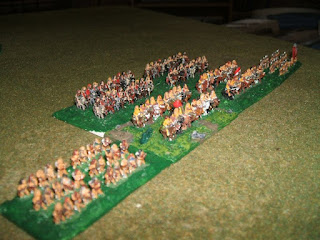 Stratagems include various bonuses to the army such as flank marches, improved scouting and equipping missile troops with stakes. There are also some fantasy items added to the list. This allows you to give further character to the army by giving Wood Elves abilities such as Woodsman, Scouting or Ambush.

I like these rules and I plan to use them with 15mm armies on 80mm frontage. I might also use 6mm figures on 60mm frontage which I started years ago and never finished.
Posted by Owen_LBWS at 14:02 No comments: