Some mushrooms you can eat, some will poison you, and some, apparently will bash you over the head with a giant axe. 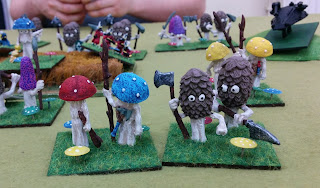 This is a 200 point game of Alien Squad Leader at the local club http://bristolwargaming.co.uk
Richard’s army are Alien Tribal Mercenaries which include a mix of high tech aliens and low tech primitives. 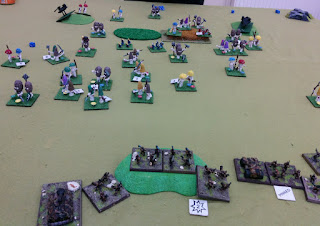 Having acquired masses of mushroom men made by Dungeon Worlds at the Legionary show at Exeter last month he created an army with in no time. He maxed out on Alien Tribal Warriors who have the Big and Tough rule giving them +1 in melee and allowing them to completely ignore their first hit. We tried an alternative rule this time, giving them a 4th hit but having them still react (flee) and count as wounded. 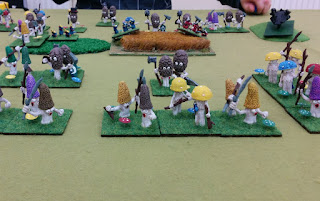 My army was an human imperial strike force. Power armour infantry, armoured personnel carriers upgraded with heavy weapons and light vehicles. I had 3 infantry upgraded to commanders, 2 with heavy weapons, and nearly everything with aiming devices. 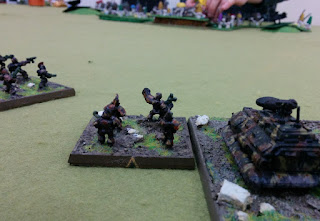 The human imperial Strike Force has the option to always be the attacker but I opted not to use this when I rolled defender on the dice. I could get more advantage by setting up the terrain, choosing as little cover as possible, since I want to shoot and he wants to charge. The scenario rolled was Meeting Engagement where most units start of table and have to move on using commands.

With 3 full commanders and 2 primitive commanders, and using group moves, Richard was able to get his whole army on in the first turn. I opened a second entry point on my right flank but couldn’t get everything in place before the horde were rushing towards me. 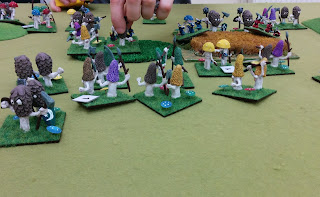 On my left I had light vehicles. I aimed to dance around the wide open flank, probably moving each turn to avoid being charged. However, a hit or two from Richards APCs and a few failed commands left them barely out of the deployment zone when they were charged and destroyed. 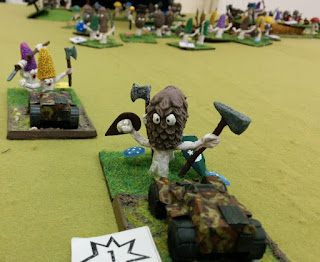 I tried to keep my units at the magic distance of being in shooting range but out of charge range and always shooting at the units in a position to charge me next turn. I gave up on his armoured vehicles after a few shots as they were harder to hit and damage. I’d accept the hits for those few units and concentrate on the infantry. 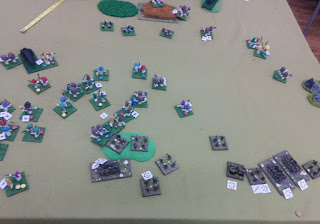 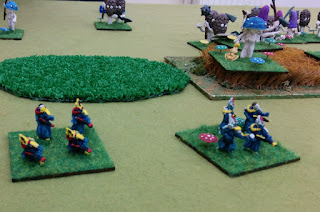 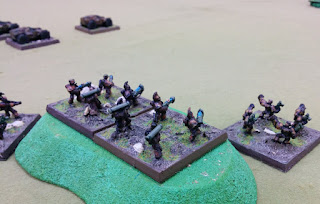 The waves kept coming and being beaten back but eventually combats started from the left and hits started piling up. My units on the hill survived about 6 turns in melee taking only a single hit between them. There was a point where I seemed to be on course to win. 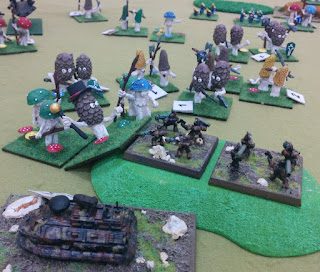 I needed every unit firing so couldn’t hide my commanders away and with no cover they were prime targets for the APCs, firing over the mushrooms from hills. When all my commanders were gone it was over in a couple of turns. Needing 7+ on two dice, made harder still by hits and pinned markers I hardly got any orders off, so only my (unpinned) units in range for free reactions could do anything. 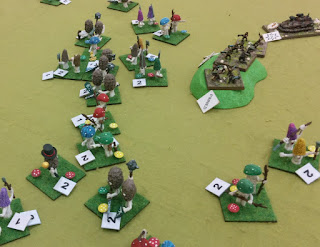 When my army reached it’s break point I had inflicted a massive 76 wounds on the enemy but only destroyed 4 stands, just look at all those hit counters. A good game. 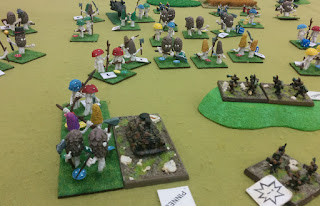