We played Poseidon’s Warriors for the first-time recently at Lincombe Barn www.bristolwargaming.co.uk It is a classical naval game by John Lambshead and published by Osprey.  This isn’t really a review, I haven’t read the rulebook and it’s just about one game. We had four players with 18 slow trimarans (capable of boarding actions unlike light ones) per side in squadrons of four or five. These ships are destroyed if they take one hit. This would be a small game under these rules. One squadron moves at a time with no input from the receiving player. 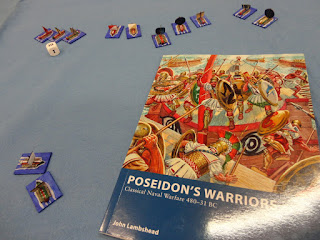 My squadron on the right hugged the coast hoping to catch Craig’s ships in the side, my central squadron continued forward to meet Craig’s corresponding squadron while I moved the two ships from the left, behind the other ships to threaten the flank of Craig’s right hand squadron.  My ally John moved into the centre while his opposite number, Andy, sent one squadron to meet them and the other on a long flanking manoeuvre which lasted the whole game. 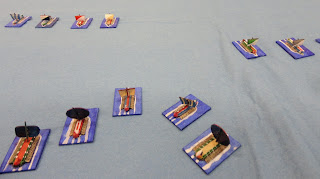 The rules are simple, our ships had 5” of movement, with a turn of up to 45 degrees costing an inch, and requiring an inch moved forward first. Ships of this side have one hit point. The problem is that ships have no momentum from one turn to the next, there will never be an accidental collision or a desperate attempt to avoid one by manoeuvre because ships can go from full speed in one turn to a dead stop in the next, and even turn on the spot at the same time. 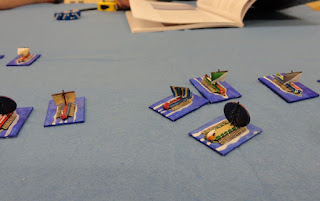 I got some flank collisions into the side of some of Craig’s ships from both directions, and lost one of my own, and our fleets passed through each other. The opposition made some suicidal head on charges in the centre and attempted an oar raking attack.
We were now in an excellent position to hit the enemy centre from all sides while half of Andy’s fleet was too far out to interfere, and Craig’s left hand squadron needed to turn around.  But we had both lost a quarter of our ships and had to take a morale check. We rolled a 1 and the game was over. This was an abrupt and un-satisfying end to the game as we had taken equal losses and the battle didn’t feel close to being over. 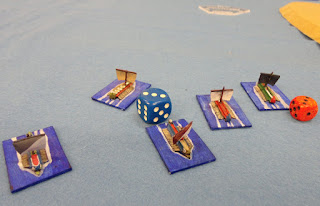 While the rules would allow a big game to run quickly, the lack of momentum removes what should be a major aspect of this kind of warfare where ships are ramming, raking and boarding. The morale rules seem arbitrary with an all or nothing break test at 25%, while individual ships never take tests for attempting dangerous actions.