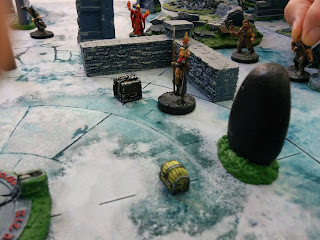 The scenario is home made. Two thirds of the treasure is in the circle in the centre. Spells cannot be cast into the circle or effect models within it. Whatever treasure remains in the circle at the end of the game is distributed according to how many models each player has within it.

Carol's Wizard, below, is an Elementalist, mine is an Enchanter. I enchanted a couple of weapons as I advanced, but my spellcasting for much of the game was poor. 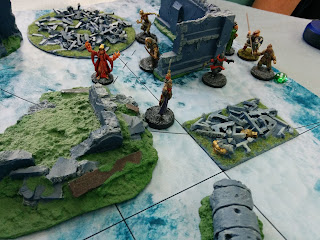 Richard's Wizard was a Chronomancer, a wizard specialising in manipulating time. I was particularly wary of his Decay spell which turns weapons to dust and is very easy to cast. He sped up his troops by casting Fleet Feet on several of them. 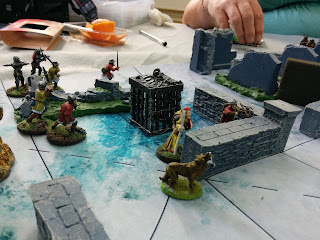 Andy's Wizard was a Witch (or Warlock) and was casting Fog all over the place to protect himself by blocking line of sight. There were 4 fog banks by the end of the game. My line of missile troops at the perimeter wall found themselves engulfed and unable to shoot. I moved them onto treasure grabbing duties. 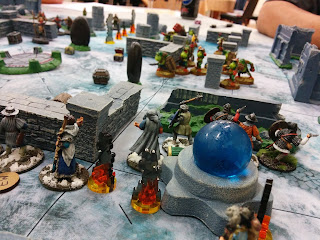 After taking out a frog person (Andy's band are frogs) with an arrow I rushed forward with my Men at Arms to grab it, unwisely as Andy had twice as many figures heading the same way. The giant frog represents a Bear, summoned with the Animal Companion spell. 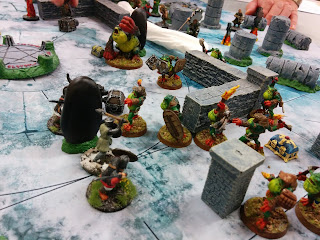 A squabble between two figures over a treasure soon escalated into a bloodbath involving half of Richard and Carol's fighters. 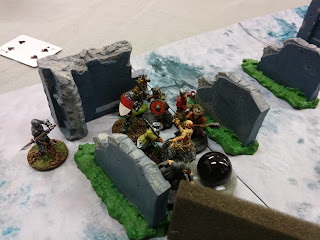 I picked up a treasure and a Werewolf appeared nearby. Before it could attack my Apprentice hit it with the Grenade spell and reduced it to two wounds. My Archer moved round to shoot at it, failing and being charged by the wounded monster, but suffered no damage. 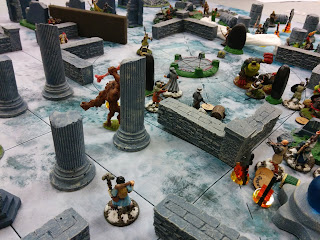 Richard's Apprentice destroyed Carol's Wizard's weapon with the Decay spell and then his Knight took her out of the game in melee. The Wizard turned out to be fully recovered after the game. 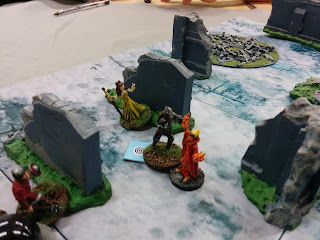 Andy used Summon Demon to put an Imp amongst my band but it was quickly killed by my Infantryman. Carole's Crossbowman moved through the mist to take out one of Andy's frogs. 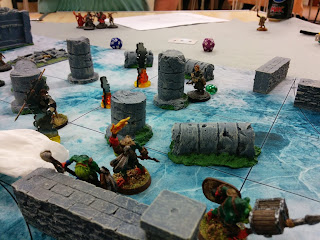 Carole picked up a treasure and a minor demon appeared, she sent another minion to help fight it. 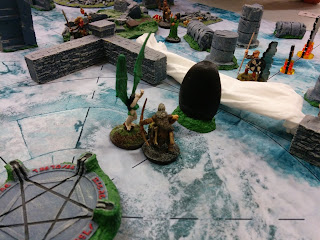 Monsters were popping up all over at this point, a giant spider appeared behind Andy's band. 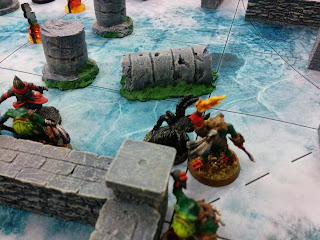 Andy picked up a treasure and two wild dogs appeared which killed one of his people. 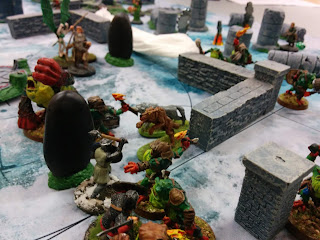 With time running out and another booking in the hall after us we finished on this turn, assuming all the treasure actually grabbed was taken off table safely. Unlike previous games using this scenario there was no unclaimed treasure left to be distributed. Each of us got three treasures. Frostgrave is always fun. We are actually playing it on the recommended playing area rather than using the whole table, which means we are into meaningful actions much quicker.