Last year a club member introduced us to Sword and Spear by Great Escape Games, followed by its fantasy variant. We played in 28mm and at least 4 of us got ourselves the rules and started building armies in 15mm which are now ready and getting some use. 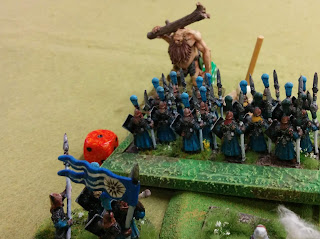 My army was 1,200 points minus the hero (riding a pegasus) that was missing due to one of it's wings going missing, Carol's was more like 1,500 but she brought it down to a similar level by fielding fewer deeper units. This was the first time out for the Elves. 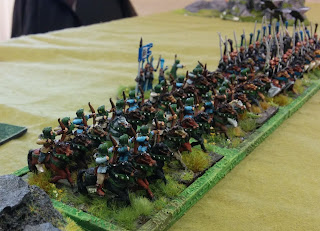 Carol's barbarians are from the Copplestone Castings 15mm Barbarica range (although they're more like 18mm tall). They are great sculpts and are like miniature versions of the 28mm ones he did for Grenadier long ago. Most of the barbarians units have either Impact or Powerful Attack, both of which cancel out my troops' armour in the right circumstances. The big units of infantry are harder to maneuver but have an extra attack dice and can take more damage. 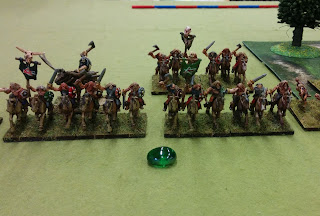 My Elves are from Magister Militum, and are also quite tall for 15mm figures. There is very little variety which is ok for the regular types but not so good for the light stuff. The giant eagles are from Kalistra.They started out as a 24 point army for Hordes of the Things which I have expanded fourfold for these rules.  The spears and longbows are armoured and the knights are heavily armoured, this would be useful if the other side didn't have Impact and Powerful Attack on most of the units. 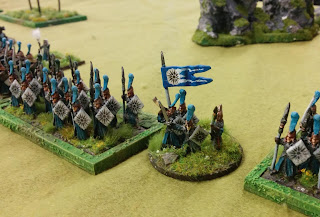 Each side has a general, two captains and two wizards. Wizards in these rules can boost other units with extra dice, range or movement, heal damage and make their own ranged attacks. 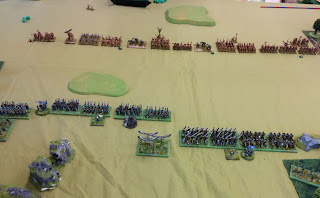 I got onto the hill and repelled a series of charges. Using magic and moving my commanders back and forward I was able to keep rallying them and restoring them to full morale. Carol's wolves and a frenzied cave dwellers were destroyed and her giant was killed by longbow fire, so far so good. 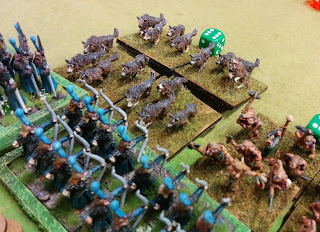 When things started moving on the right my luck changed, my horse archers made little impact before being flattened by the barbarian cavalry. 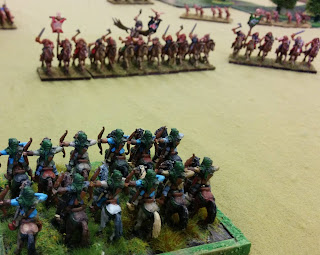 My Knights moved forward and the eagles charged hoping to protect the rear, the eagles too were destroyed in the first combat. The Knights did dismally against barbarian infantry and trolls and were both destroyed. 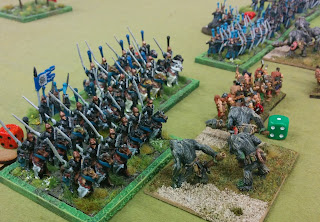 Being inexperienced with the rules we were keeping things casual and hadn't kept track of  break points. At this point my army was probably close to breaking with my prestige units and three others gone but we carried on regardless 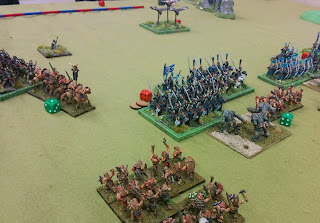 I had been using my activation dice defending on the hill and throwing on the right so I still hadn't brought my now unengaged left round to flank Carol's infantry. I belatedly moved some light foot and archers round to do some shooting and chased after some light foot. Now a horde was closing on my line and, having other enemies to the front my infantry couldn't redeploy to face them and there were a succession of fights where units were attacked on two sides with predictable results.

Unlike games like Warhammer, Warmaster or Kings of War you don't sit passively for long periods while your opponent completes their turn. Instead each turn is divided into phases and both players activate units in each phase assuming some of their dice come out of the bag. This keeps means there's never a dull moment. 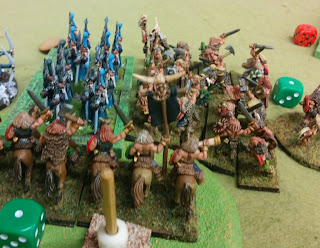