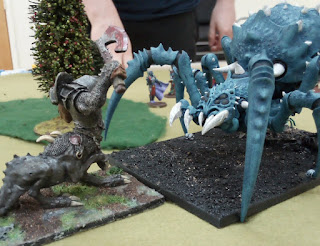 Saga is now on it's second edition, there is a main rulebook and then a supplement for each of the 'periods', Vikings, Crusades etc, and Age of Magic which covers the fantasy genre. Each faction,be it Anglo Saxon or the Undead has restrictions on which troops it can include and has a unique battle board defining it's abilities. Special Dice are rolled each turn and placed on the board to activate the abilities.All units have access to Hearthguard at 4 figures per point, Warriors at 8 figures per point and Levies at 12 figures per point, plus a mandatory Warlord. The Fantasy armies have other unit types like Creatures, Monsters and various types of Heroes. 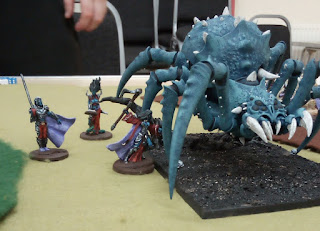 This is an eight point game played at the club bristolwargaming.co.uk

My army used the The Horde army list.  My figures are from my old Warhammer Chaos army had a Warlord, 12 Hearthguard in two units, 8 Warriors on foot, 8 Mounted Warriors (actually centaurs), a Behemoth (at class of monster) and a Sorcerer (a class of Hero). 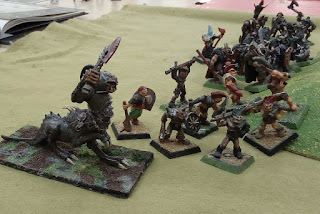 Richard's army used The Lords of the Wild list and his army included giant spiders (Creatures), a huge spider (Behemoth), a Ranger, a Sorcerer and some Warriors.

Richard put his archers in the corner due to an ability that would soon be causing me problems and left his other warriors guarding them. I considered rushing them but with his army doing better in bad going than mine I would be intercepted anyway, so I went after what was available. 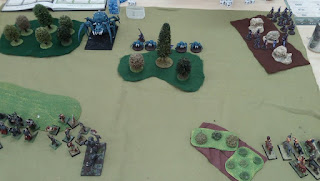 Richard's army had several key abilities that made it very potent. The Ranger allowed all his units in the same bad going to ignore it's penalties, he spent most of the game in the central wood.  The Ambush ability on the battle board allows a unit of archers to draw a line of sight from any unoccupied of uneven ground. That meant they could shoot me without going near danger.  The Rise of the Spirits ability transforms a piece of uneven terrain into a Titan (a kind of monster) which can then rampage around the table. Both these abilities became doubly dangerous combined with a spell he had which could create new uneven terrain. 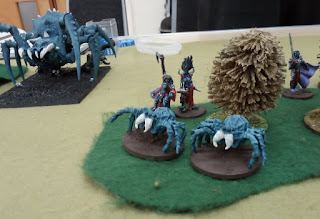 After coming under unexpected fire which left my Behemoth fatigued for several turns I decided I needed to get stuck in as quickly as possible. My Centaurs went into some Spiders in the wood and suffered fatigue for moving twice and entering a wood, they lost badly and were finished off by archers.

Having spent a lot of points on Hearthguard and having lost a unit I was short on Saga Dice and had to use most of them just to keep moving rather than anything fancy. I also wasted some because I kept forgetting the Behemoth couldn't use the special abilities on the board where I'd put them. 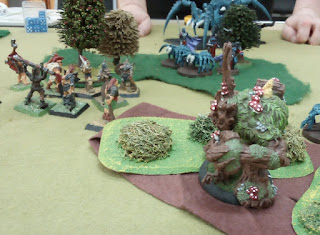 A treeman infested copse was summoned and destroyed my foot warriors. My Behemoth killed it and then a unit of Creatures (those little spiders are acting as fatigue markers) too, then went head to head with the enemy Behemoth which killed him. 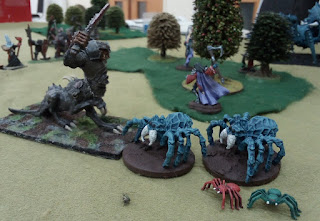 My Sorcerer got a few spells of boosting the units around him but he was next to fall to the Giant Spider. My Hearthguard and Warlord killed the other Creatures and Richard's characters withdrew to safety. 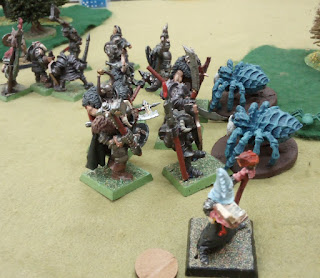 A second Titan appeared in a newly summoned wood and attacked me from one side while the Giant Spider continued to plough through my army. 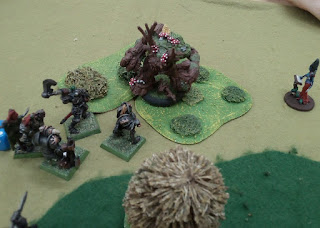 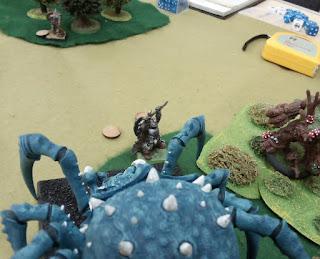 The Wild army is very tough to face, I will need to study my own board carefully to see how to use it better.
Posted by Owen_LBWS at 12:41