Stargrunt II is a skirmish game from GZG intended for their own range of 15mm and 25mm figures. I first started playing it 20 years ago but I was slow to get much painted and I only ever had a few games, and the last around ten years ago. So it was a case of half remembered rules and checking the play sheet when we brought it out at the club last week, and we took a few short cuts to keep things moving. 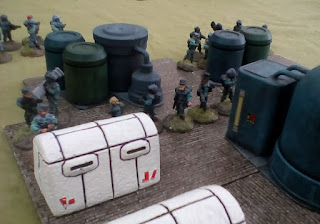 The figures are from GZG and are 25mm rather than the more common 28mm or ‘heroic’ 28mm found these days. They represent the New Anglian Confederation and Federal Stats Europa. I’m not sure which faction the powered armour are for as I bought them on a bring and buy and there aren’t many pictures on the GZG site to compare them to. The army squad, which have khaki instead of green battledress are another faction as well, but again I couldn’t identify them.

The figures in brown are from the Battletech spin-off Battle Troops, they are the Kurita machine gun assault platoon produced by Ral Partha. 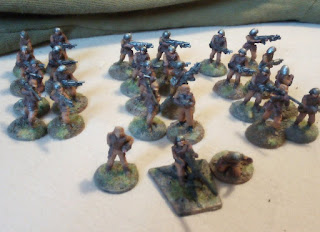 While the paint job on the powered armour makes them look like they belong with the FSE I could only make a balanced force with the figures I had painted by putting them on the other side.
The New Anglian Confederation had a platoon of four sections with veteran quality (the marines), an elite squad in powered armour and an average quality squad (army). They also had an independent sniper. 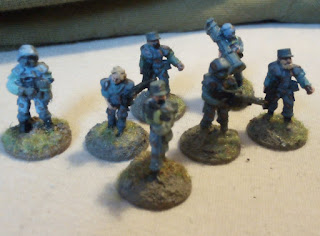 We threw out the terrain randomly, John picked the FSE.  I started everyone on Confidant status to keep things simple.

John’s militia were on my left and the legionnaires in the centre and right. I put my powered armour squad facing a built up area in the centre, predicting both sides would contest it and I could have them assault the enemy. I kept my command squad out of danger in a wood behind another squad and after the first turn I was using all his actions to activate other squads for a second time. 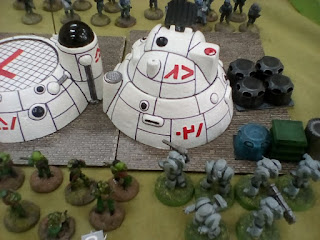 2 squads of legionnaires entered the built up area on the centre line and a squad of marines and powered armour did the same from the other side. My powered armour charged both squads in successive turns who failed their morale tests and withdrew back into the open, where I was able to pin them with fire. From there on I kept using my commander to activate each squad twice each turn hammering them in the open (make hay while the sun shines).

John was re-activating his as well but they were never able to do much damage and spent half their time at least removing suppression markers. My marine squad started taking significant damage from the militia in the woods but their morale held. 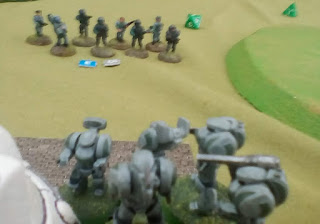 On the right the FSE finally reached the far side of their built up area and exchanged fire with their opposite numbers. 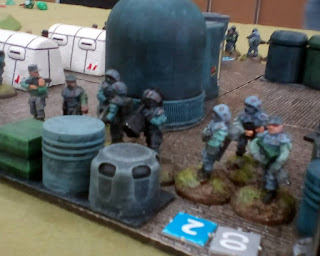 Eventually the two squads in the open broke, abandoning two wounded and the troops behind them were able to fire for the first time. 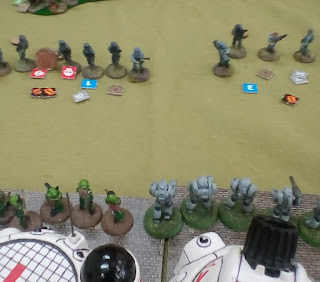 With time nearly up we called it there as a victory for the NAC. 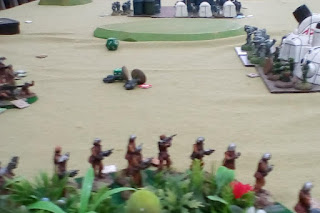 When we’d played with only one platoon a side we found games typically became fairly static with no-one leaving cover for most of the game. This time we had slightly large forces but most units headed for the cover in front of them and stayed there. This is probably due to the typical ‘wargames’ layout of terrain with a dozen woods, hills and built up areas scattered randomly around a field. I think a more lifelike arrangement would probably solve this. 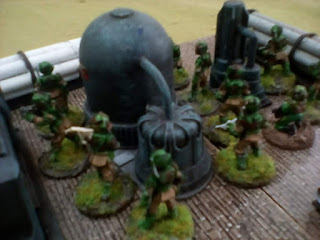 Something I really like about Stargrunt is that troop quality and leadership is important in all aspects of the game. In too many games superior equipment and especially superior numbers count for much more. In real life superior troops routinely beat superior numbers. I think we’ll be playing it again now, and next time I’ll have to re-read the rules first.
Posted by Owen_LBWS at 10:32