This is a 200 point game of Alien Squad Leader. 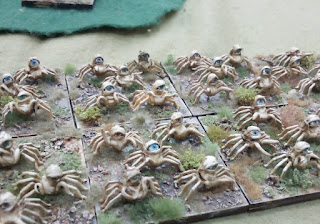 My army are Alien Enslavers. The enslaver infantry are from GZG's 'chitter' range of six legged aliens. The Floaters are from Alternative Armies. The thralls are home-made from plastic spiders and round headed pins for the eyeballs. The red beasts are converted from plastic ants using green stuff and the remaining beasts are from various sources. That's a lot of legs. 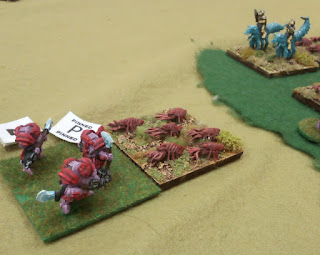 Richard's army use the 2nd Global War: Far Eastern Empire army list, although they have a purely sci-fi look. 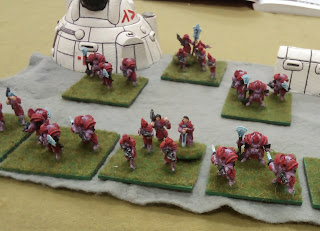 Richard was defending, the scenario meant his army wouldn't break while he controlled the objective area in the centre. The 3 artillery in the far corner were going to cause a lot of trouble for a horde army like mine. The scenario allowed me to add new entry points on the sides of the table during the game but I decided the number of units I'd be allowed to bring on wouldn't be enough to deal with all the units defending them. Instead I aimed to pour into the objective from the opposite direction. 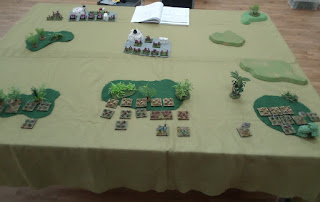 Seeing that I wasn't going to try to reach the artillery Richard sent his light tanks forward to engage my left flank, several off them breaking down. 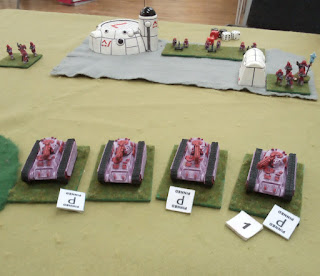 Richard had 4 units of Cyber-Samurai who were very good but also obliged to charge if possible. I moved my worthless thralls out of cover to trigger them. I could then shoot his premium troops without worrying if I hit my own thralls who neither react to fire or count towards my break point. As the Thralls started dying they pushed on into my enslaver units. I destroyed all four units eventually but I was unable to advance past them. 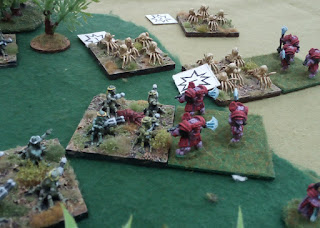 My left flank collapsed rapidly under fire from the tanks and artillery. 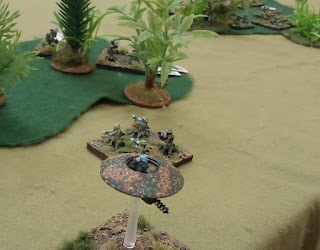 On my right I opened a new entry point with the intention that the fast primitives would join with the advance already underway. They took a long time to get in position and Richard was able to reinforce the objective, replacing the elite warriors I had pulled out of it. 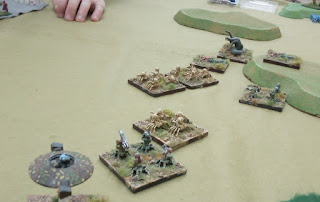 My beasts went in and lost the combat, they were then being shot at from the objective and the pile up of units was being bombarded by artillery. 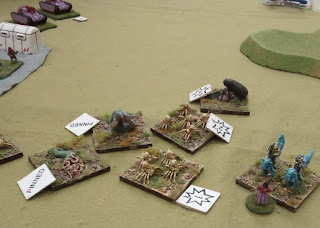 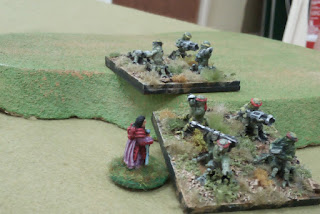 By now my army was incapable of any offensive action and it was just a matter of Richard mopping up enough units to reach the break point. So we called it there. 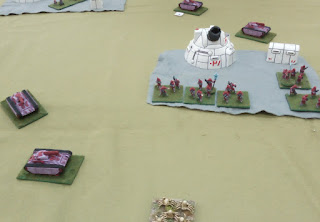 My plan for drawing the cyber-samurai out of the objective and shooting them in the open was sound but I should have planned to move round them instead of through them because they hung around for a long time. I should have moved quicker on the right rather than hiding behind slow moving thralls, since they weren't facing that much firepower, then I could have got the primitives into the objective much earlier.

After the game 7 of us played an entertaining board game in which we attempted to flee our own city of Bristol and the plague, called Bristol 1350.