This was 1,500 points, I had Early Byzantines. I bought most of the army ready made at a tournament and it was a good buy, but it only included one unit of light cavalry, and I haven't gotten round to fixing that yet. 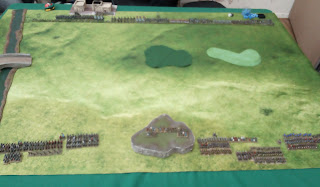 All the cavalry on  both sides are on the left of the picture, except for my Cataphracts which were with the infantry. 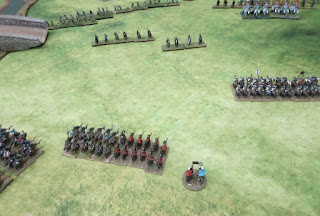 Bob has a lot of light cavalry facing me, some serious cavalry and elephants. My heavy cavalry have bows with 15cm range, a 5+save and are shock cavalry, meaning they are on narrow deep bases, getting more units in contact. 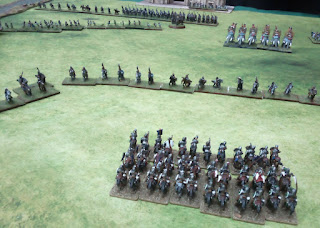 I have to get them into combat but the enemy light horse are able to evade them when I charge leaving me open to flank charges. 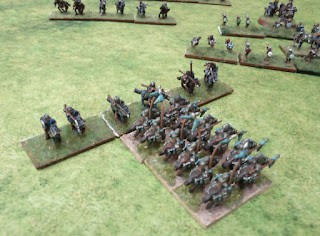 My initial units are now spread out all over the place. 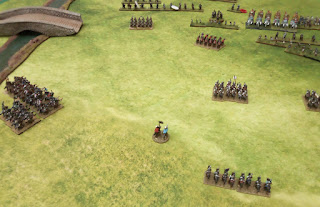 The elephants are getting closer but I'm unable to charge them because of the enemy light cavalry, so they will be charging me instead. 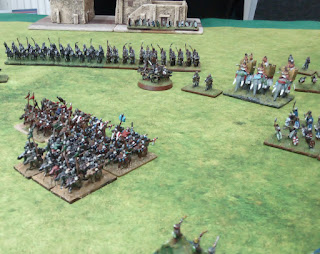 In the following turns I get charged from all directions repeatedly. I lose most of my heavy cavalry without them ever making a successful charge. I kill most of the elephants but it's my army has lost most of it's good troops. 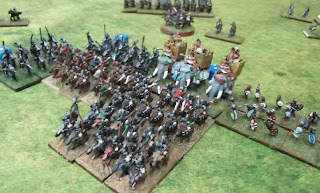 On the other side the infantry face off until I am losing the cavalry battle. I shuffle my line into further towards the centre. 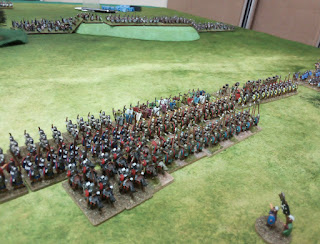 I put some archers on a cliff which is impassable to the front thinking the ground in front of it might be important later but they were wasted. My dismal command rolls meant I was only getting about one action per turn out of two sub commanders so there was no opportunity to move them which would have taken some time. 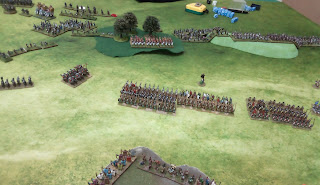 I had the cataphracts on with the infantry but they now join the cavalry fight too (It's clear I've lost at this point and we give it about one more turn. 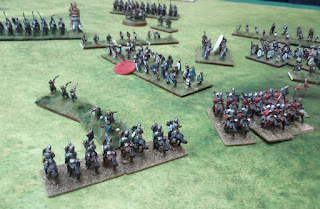 In the final act the Carthaginian warbands charge my infantry who have archers at the front. They smash through both with ease.

I have too get more light cavalry. The army relies on getting the heavy cavalry in piling a lot of quality into a small space, but frequently they end up broken up and vulnerable due to enemy light horse. I can have some Huns in the army which could chase off enemy light horse and clear the path.