We had our first game of Star Grave at the club on Sunday. We had played a lot of Frostgrave in the past and had several long running campaigns. For this game we had two teams of two and each of us used half our crew with either the Captain or the First Mate. Nigel ran the game for us and controlled the hostile locals. 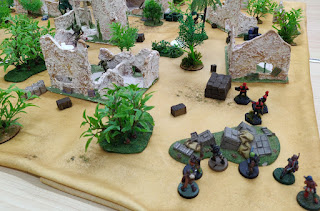 Kev had his captain, I had my first mate, a cyborg. I succesfully added armour plates to him pre-game but forgot to use his restructure body ability which was also pre-game. We deployed in a corner, there were a couple of ruffians guarding the nearby loot.

Carol and Kev set up in the opposite corner, a group of them dealt with ruffians on their side. 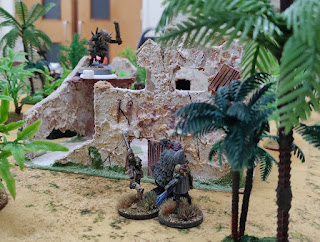 I took out one ruffian and Kev took out the other has he sped past on his way to the centre. More ruffians appeared in our rear, some of my crew stayed back to deal with them while a couple more moved on to the loot. As I took them out more appeared and we ended up having deal with six of them. My cyborg first mate took out some with his flamethrower. 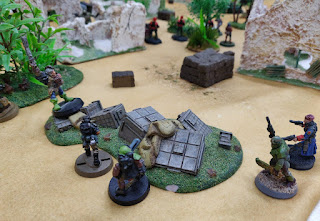 This frog thing is a defurd, which is one of the harder monsters appeared and stunned and poisoned my pathfinder (not in the picture) with it's spitting attack. My medic wasn't going near that thing so the pathfinder was finished off. It also hit my cyborg reducing him to one action per turn until my medic healed him. 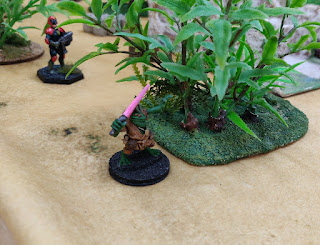 A Warp hound appeared to attack Matt's crew, another of the more dangerous monsters and killed a couple of the crew. 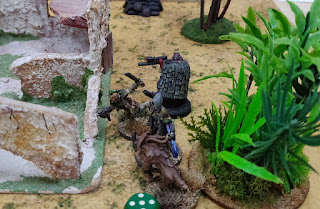 My hacker secured a data loot token and exited towards the centre, with the medic to help fight for the central objective, and away from the frog.I had planned to contest the loot item further along the table but the frog would make that too risky. 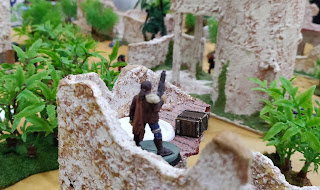 Fighting was underway between Carol and Kev's forces in the middle. 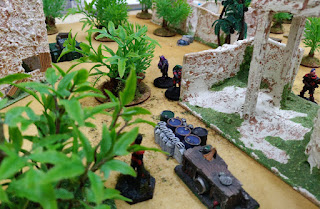 One of Kev's crew was climbing the tower in the centre, of of Matt's was in pursuit and they fought inside. Matt won and climbed on for the loot at the top. 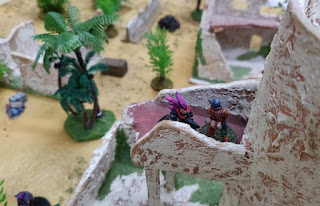 Annother of the big monsters appeared, I can't remember what it acually was but we were calling it the soup dragon. This piled into the members of Matt's crew that had survived the warp hound. 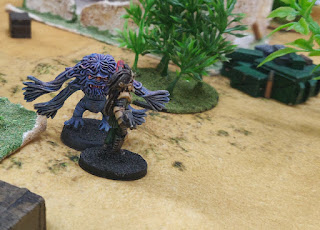 Kev had lost most of his crew by now. We each had one loot (out of five) and our escape point was still blocked by ruffians and the frog thing would block us off if we hung around. We decided to make a sharp exit. One of Kev's troopers was cut off and fell to the frog. 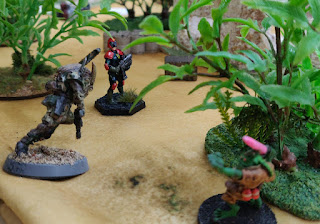 We took out the final pair of ruffians and escaped, surviving one last spitting attack from the frog. 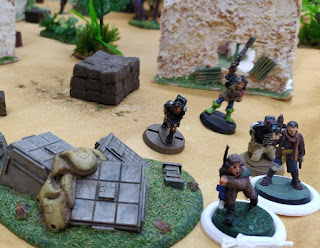 Carol now tried to get the last piece of loot and a chase ensued. The frog took out her crew member and the loot was lost. 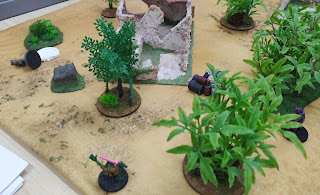 There were a lot of casualties, mostly from the local inhabitants. The game was a lot of fun.