Northern Lights army for Hordes of the Things

By Owen_lbws, aka Olaf the Hairy

Northern Lights is a novel by Philip Pullman set in a parallel universe where humans are accompanied by their own daemons, in the form of talking animals, and the church is all-powerful. The north is inhabited by witches, and the Panzerbeorn, intelligent armoured bears with opposable thumbs. The Gyptians are river-boat gypsies. It is part of the trilogy, His Dark Materials. The later novels involve traveling between other universes including our own. There was a disappointing film adaptation in 2007 titled The Golden Compass (the American title). 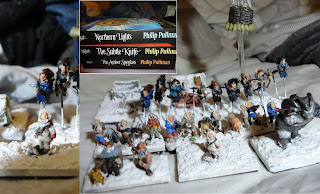 My army is based on the forces sent to rescue the children at Bolvangar. It is 15mm (40mm frontage). Lyra, the 12 year old heroine who uses a mysterious device to discover information does a lot of sneaking around, and escaping and deceives Iofur Rakinson, earning the sobriquet Silvertounge, so she is a Sneaker. I chose to show her daemon, Pantalaimon as an ermine (stoat).

Iorek Byrnison, the armoured bear, is a hero rather than a Beast. He follows a code of honour and regains his position in single combat, but should be more durable than a Paladin. Lee Scoresby’s balloon is an Airboat, note that it is a gas balloon not a hot air balloon. 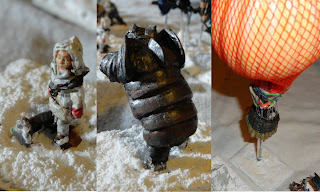 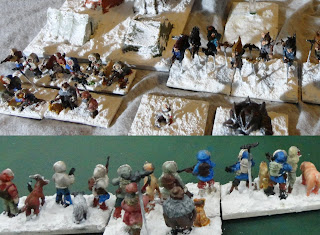 I made Lyra from a child figure from a sci-fi colonist pack from GZG. I added the hood, fur trim and satchel with green stuff and made Pantalaimon from green stuff too. Iorek is from a pack of dwarves riding bears, from Magister Militum, I removed the saddle and did the armour in brown stuff. It’s my first attempt at plate armour and it looks a bit wobbly.

The Gyptians are mostly from Khurasan Miniatures, based on John Carpenter’s remake, The Thing. Their daemons are from a farm animal pack from Museum Miniatures. John Faa is a medieval man-at-arms with some green stuff. The witches are from Magister Militum, I cut most of them off at waist level and gave them archer bodies, then green stuff robes and hair. Their daemons were 15mm bats that I turned into birds.

The balloon is a Christmas tree decoration; the net came with onions in. It sits on a Perspex rod which goes up inside the balloon. The basket is made from plastic gabions and the ring is cut from the metal grill of a bird feeder. The connections are sewn together and then glued. The stronghold is made from resin tents from several suppliers. The bases were done with a mixture of snow flock from Army Painter, white paint and PVA glue.

The army had its first outing at the 2017 Hott-Barn competition in Bristol http://bristolwargaming.co.uk/barnhott.html

Email ThisBlogThis!Share to TwitterShare to FacebookShare to Pinterest
Labels: HotT