This was a 1,500 point game of Warmaster Ancients between myself (Alex Self), with Late Romans, and Bob Leitch, with Egyptians. The Late Romans are a typical heavy infantry army, although it is possible to take quite a lot of heavy cavalry if you want to. The Egyptians are a nasty combination of cheap, poor quality infantry, combined with very maneuverable and effective chariotry. The obvious way to beat the Egyptians is to take out their infantry, but this is very challenging as the chariots will move to get in the way and harass at every opportunity!

Fortunately for me, Bob threw poor leadership dice for his chariot reserve, and they did not move to assist his frontline troops until late in the game. The chariots in the centre were effectively tackled with bowfire, and my spearmen were able to advance to smash the Egyptian frontline.

The late game saw me finishing off Bob's second line of heavy infantry, but otherwise the Romans were rather strung out, and not in a good position to face the remaining Chariots. The game ended as a draw, but we felt that if it had continued, the Egyptians would have won. 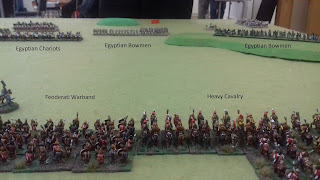 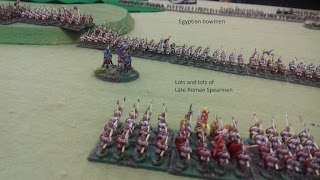 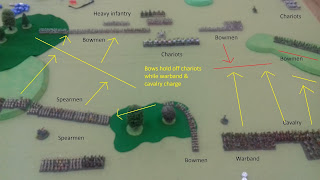 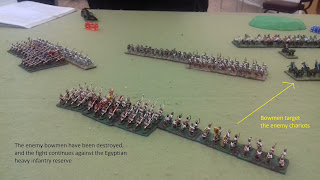 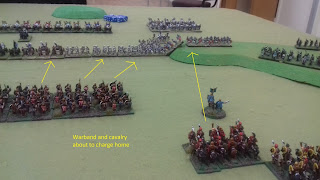